Reese Witherspoon branches into fashion and lifestyle with Draper James, which plays on her love of all things Southern.

By Rosemary Feitelberg on May 6, 2015
View Slideshow 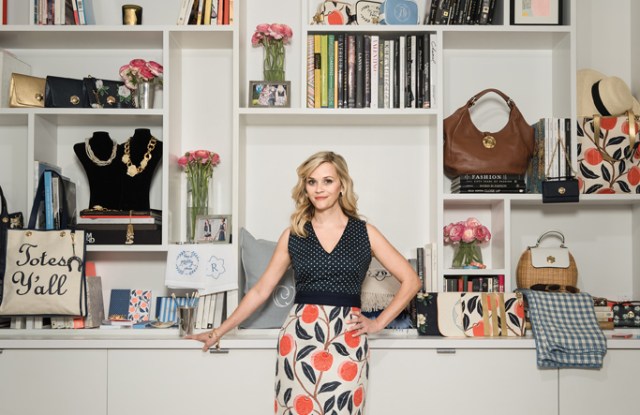 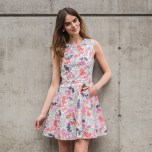 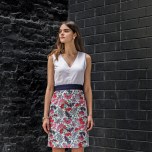 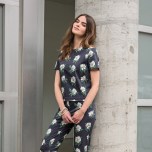 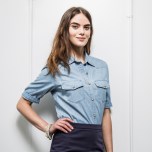 Skeptics might want to hold off on any eye rolls in response to Reese Witherspoon’s foray into fashion with her line called Draper James.

First of all, the actress and producer is already booked with projects. In the wake of her Oscar-nominated performance in “Wild,” a film she also produced, Witherspoon is back in theaters Friday with Sofia Vergara in the comedy “Hot Pursuit.” She recently locked up the film rights for Gayle Tzemach Lemmon’s book “Ashley’s War: The Untold Story of a Team of Women Soldiers on the Special Ops Battlefield,” before the book was even published. Another coup was being chosen to narrate the audiobook for Harper Lee’s “Go Set a Watchman,” which hits stores July 14.

As for Draper James, the Southern-inspired sportswear and lifestyle label she launched online Tuesday, Witherspoon is exhibiting her typical hands-on and all-in approach: She’s the majority shareholder in the brand.

At a recent photo shoot in New York, Witherspoon is all smiles and Southern charm, winning over a roomful of strangers practically as soon as she arrives. Hands are shaken. Jokes are made. Samples are admired. She even clues in bystanders that her crossed-leg stance steadies shaky legs. After a quick inspection of the supergirly Draper James-adorned space, the actress and her team of four step out for a quick change, apparently somewhat amused by the suggestion of wearing gray. “It’s New York,” a well-meaning handler explains.

Dress codes south of the Mason-Dixon Line are considerably brighter, livelier and girlier — all of which Witherspoon has no problem with. “One of our tenets is ‘unapologetically pretty.’ Like, what’s wrong with being pretty? That went out the window a long time ago,” the actress says with a laugh. “In the South, there’s a lot of color, prints, tradition, traditional fabrics like gingham, plaids, stripes. There’s also definitely a feeling that what you wear makes you feel better, especially if you’re wearing color, prints or joyful things.”

Foreign as this ethos sounds to Northern urbanites, Witherspoon is so sold on the whole Southern thing that 40 percent of the Draper James collection is made in the South and its e-commerce site also spotlights City Guides of locations in the region. For home and entertaining items, Draper James recruited Charleston, S.C., resources Hanna Nation Seabrook for stationery and silversmith Kaminer Haislip, as well as the Savannah shop Number Four Eleven. Draper James actually started out trying to hire only Southerners, according to chief executive officer Andrea Hyde, who joined Witherspoon for the interview. That idea disappeared with the addition of design director Frederic Tremblay, the former vice president of design for Tory Burch, says Hyde, who most recently worked for another Burch — Chris — on his now-defunct C. Wonder and other projects.

“The details were really important to Reese — she doesn’t like to compromise,” says Hyde.

“I don’t. And when things came back and they weren’t good enough, I was like, ‘Not good enough. Not good enough,’” Witherspoon says knowingly. “It’s a big deal that my name is on something. It’s not just my name. It’s my grandparents’ name, which is a big, big deal. And you know I feel very emotional about it.”

Her aim with Draper James is to awaken a sense of patriotism among shoppers to the extent that they will actually travel to Southern cities and buy goods from businesses featured on the company’s Web site. “I hope that it sort of opens people’s eyes to how much the South has changed and to all of the cultural experiences happening there. We’re going to have City Guides but through my eyes, the places I love. We will have different Southern ambassadors that will show places to buy amazing Southern antique silver or where to find hand towels like their grandmothers had.”

Wearing one of the fit-and-flare floral dresses that Draper James expects to be a bestseller, Witherspoon says selling directly to consumers helps keep prices down, indicates what they like and will help the team tweak their offerings accordingly. The name borrows from those of her maternal grandparents Dorothea Draper and William James Witherspoon. Staffers researched textiles at Raleigh, N.C.’s Gregg Museum of Art & Design. Noting that anyone who knows her knows she wears color, she points out “Marry Me” magnolia-printed shorts with a coordinating cutout top, accessories like a “Totes Y’all” tote bag and an assortment of such home goods as a magnolia-shaped sterling bowl. The sportswear will retail from $50 for a top up to $400 for a dress. Jewelry will sell between $25 and $250, handbags and small leather goods will be in the $40 to $325 range and home decor starts at $14 for pencils to $400 for a sterling silver magnolia-shaped bowl. And in a sign of her ambitions for the brand, there will be five Draper James collections a year.

None of the Draper James home items will be featured in a soon-to-be-opened Witherspoon-owned hotel, though, because, contrary to online reports, one is not in the works in Nashville. “There’s no hotel. I don’t know why people think I’m making a hotel, but I’m not,” she says. What is under construction there is a 3,000-square-foot Draper James store that will open this fall with a decor meant to mirror the actress’ own home in Nashville. “It will have all those touches of my Southern upbringing but also revealing what the South is today,” she says. “Fashion can be this friendly experience. It can let you in. I wanted everybody to feel as though they belonged. There’s already enough stuff in the world that makes you feel that you don’t belong.

“I didn’t know what the Hamptons were until Ralph Lauren showed me what the Hamptons were. I’m still not sure exactly where they are,” she says with a laugh. “But I can tell you where Sea Island, Georgia, is. And I know where Palm Beach is, and Rosemary Beach is, and Charleston. We went to Kiawah Island growing up, and Destin. There are all these beautiful places that I think people will be so charmed by how much is happening there.”

Seventy percent of Draper James is made in the U.S., and the aim is to produce everything domestically and the bulk of that in the South, Hyde says. That may take some time, since factories that had previously worked under government contracts require retraining. Through the online launch and then the store, the team plans to glean info to help define potential wholesale partners.

Having relied on Twitter recently to keep her nearly 500,000 followers up-to-speed about the upcoming launch of “Hot Pursuit,” Witherspoon plans to make social media the driving force behind Draper James. “It’s more of a lifestyle than it is a dress code,” Hyde says. Geared for today’s time-starved women, Witherspoon adds, “So if you have zero time, you’ve got three kids to drop off at school, or need to go to lunch, or gotta go to the office, you can know that you feel comfortable and you look pulled together. My grandmother was unapologetically matchy. Matchy-matchy is a good thing in my life. I like the shoes, the matchy purse, the matchy clothes.”

While Southern style conjures up a definitively feminine look for many, and to some degree a sexist one, Witherspoon says, “The interesting thing is that women in the South, and all over the country, are reading Elle, Vogue and WWD. They have such a sophisticated knowledge of fashion. I wanted to create a line that made them feel seen.”

As for her own style, she says, “I always say I’ve been around the world. I’ve been to Paris, lived in L.A., and have been making movies [in different locations] for over 20 years, but what I really love is all those traditions I grew up with. I always say to my stylist, ‘I can’t wear red to a wedding, and you don’t wear white and you can’t wear black.’ And she’s like, ‘Can you just give me the list of rules?’” Witherspoon says.

“It’s applying those ideals that my grandmother instilled in me and making them modern. This is the new South for sure — and it’s a new way to look at the South. So many people now are moving from Brooklyn and New York and from L.A. back to their hometowns in Birmingham, Montgomery, Charleston, Austin.”

Now, 13 years after she portrayed a fashion designer in “Sweet Home Alabama” (her second-highest box-office hit, grossing more than $127 million) the actress says of actually working in the industry, “It is a lot of work. It is a lot more working than standing pretending to be a designer in a movie. I think Marc Jacobs did all the clothes for that.”

Obsessed with clothes since she was a little girl, Witherspoon laughs at the memory of her school-age self taking biannual shopping trips with her maternal grandmother. “If it was like a big deal, we’d get to go to Chicago or Atlanta where they actually had stores and I got to pick out two dresses, which was super exciting,” she says, adding that she and her best friend Heather Rosenfield, used to say, ‘One day we’re going to have a store and we’re going to sit in rocking chairs on the porch and drink lemonade.’”

Rosenfield, who cofounded the children’s boutique Poppy and previously worked in interior design, is now Draper James’ director of design development. While her experience is more traditional, Witherspoon brings her own expertise. With an estimated net worth of $80 million, her clothing budget is without question no longer an issue, but her aim is to create an inclusive lifestyle brand. “It’s amazing how much I’ve learned from making costumes for movies for 25 years. I understand how to make things work — seams, underpinnings. Being on film, I know what looks good on a woman’s body and how you can use that experience to flatter a woman’s shape,” she says. “We’re thinking about all kinds of women. I understand that dresses that would look good on my mother are a different thing than what would look good on my daughter or that would look good for me. We really try to bear that in mind — that women come in all shapes and sizes. We want them to feel pretty.”

Whether acting, producing a movie or developing a clothing line, Witherspoon says she has to be all-in. “I have to be involved. I just can’t not be involved. The idea of turning something over to a group of people who don’t know where I’m from and who don’t understand that the picture of my grandmother is important and to get it back to me…Or that my charm bracelets are from 1960, it’s very, very important to me. There’s a heart and soul to things. Otherwise, what’s the point? My heart and soul is in how I feel about the South. It’s what inspires me. It’s what makes me want to go back home.”