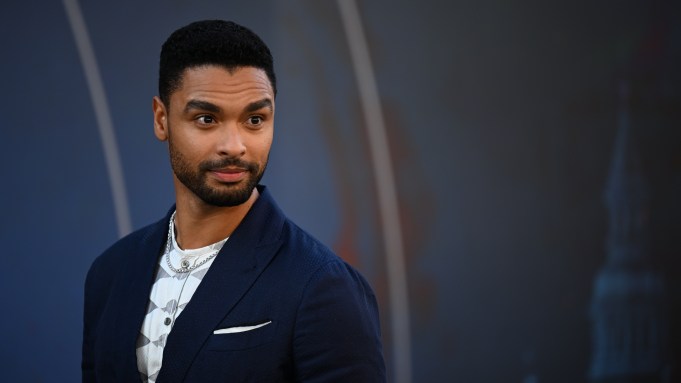 Regé-Jean Page is celebrating his latest project with a casual red carpet moment.

Page, who is best known for his beloved role in the first season of Netflix’s “Bridgerton,” posed on the red carpet with his costars, including Ana de Armas, Chris Evans, Ryan Gosling, Michael Gandolfini, Billy Bob Thornton and others.

The actor’s casual red carpet style matched that of his costar Evans, who also went with a laid-back navy Eleventy Milano suit.

Directed by Anthony and Joe Russo — the duo behind Marvel Studios’ last two “Avengers” films — “The Gray Man” tells the story of the CIA’s most skilled, and anonymous, operative who accidentally uncovers dark agency secrets and has a bounty put on him.

The film premieres in theaters on Thursday and will be available to stream on Netflix starting July 22.

“The Gray Man” is Page’s latest role since starring in “Bridgerton” in December 2020, where he took on the role of the Duke of Hastings. Page caused an uproar following the show’s debut when it was revealed he would not be returning for its second season. “Bridgerton” season two debuted this past March.

Since his role in “Bridgerton,” Page has worked with several fashion and beauty companies for campaigns, including Longines, which named the actor its newest ambassador in September, and Armani, which tapped the actor last month to front its Armani Code fragrance campaign.