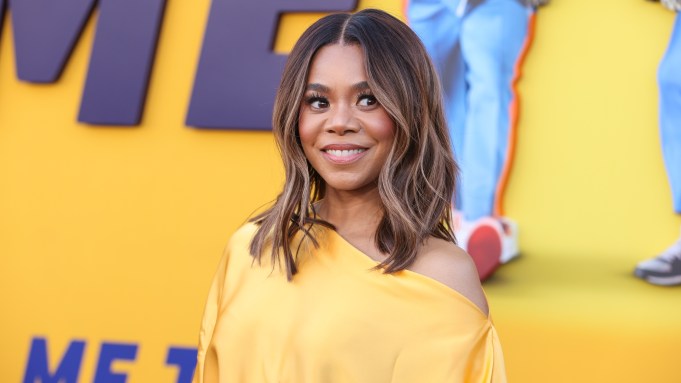 Regina Hall had a standout fashion moment at the premiere of her newest movie “Me Time.”

On Tuesday, the actress walked the red carpet of the Regency Village Theatre in Los Angeles wearing a draped silk yellow top by The Sei paired with a feathered skirt by Aliétte and gold heels by Stuart Weitzman. Hall styled her hair loose curls and kept her makeup simple.

She was styled by Alison Edmond, who also works with Joey King, Jennifer Connelly and Luke Grimes.

Hall is part of the main cast of the upcoming Netflix comedy, which premieres Aug. 26, starring alongside Kevin Hart, Mark Wahlberg, Jimmy O. Yang and Luis Gerardo Méndez, among others, all of whom joined her on the red carpet.

“Me Time” tells the story of a stay-at-home dad who finally has some “me time” when his wife and kids are away. He decides to reconnect with his former best friend for a wild weekend, though things take a turn for the unexpected.

Hall is experiencing a big year so far as she starred in three movies, including “Master,” “Honk for Jesus. Save Your Soul” and “Me Time.”

Earlier this year, Hall co-hosted the 2022 Oscars with Wanda Sykes and Amy Schumer, marking the first time the coveted awards show had a host since 2018.

The awards show went without a host in 2019 after Hart stepped down from the post following the reemergence of homophobic tweets he’d posted years prior. The Academy kept up the tradition in 2020 and 2021.