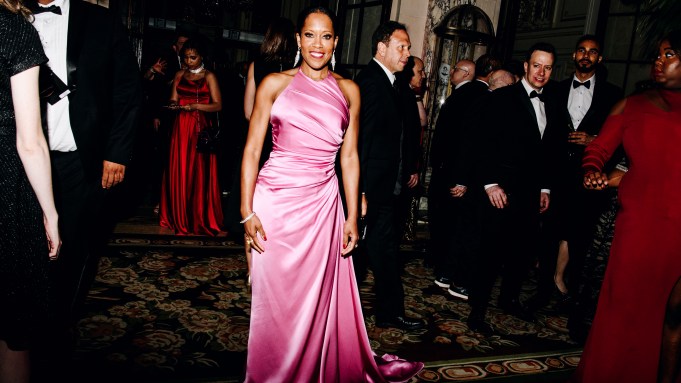 Regina King has become a force to be reckoned with, both in her career and sense of style.

The actress is lending a hand to Monday’s Met Gala, which she is co-chairing alongside Blake Lively, Ryan Reynolds and Lin-Manuel Miranda.

Since her breakthrough role in the 2004 biopic “Ray,” King has only continued to climb in her career, receiving numerous accolades, including an Academy Award, a Golden Globe Award and four Primetime Emmy Awards.

With the help of styling duo Wayman Bannerman and Micah McDonald, King has stunned on the red carpets of some of the biggest awards shows, fashion events as well as movie premieres, unafraid to wear bright and bold colors and textures.

At last year’s Met Gala, the actress wore a navy pin-striped suit designed with glittering gold and a matching cape by Michael Kors, walking alongside the designer on the red carpet. Her short hair was dyed blue for the event.

Last July, during the amfAR gala in Cannes, King stunned in a custom dress by Schiaparelli, which featured a black bugle beads bustier and a black silk peau de soie grand volume skirt with a stole in black-and-white peau de soie.

Over the years as she attended awards shows, King has worn the likes of Louis Vuitton, Galia Lahav, Alberta Ferretti, and Versace, among many others. Notably, her 2021 Oscars gown was a custom look by Louis Vuitton that was reportedly encrusted in 62,000 sequins and 4,000 crystals, had a plunging neckline and winged shoulders.

At the 2019 Met Gala the theme of which was “Camp: Notes on Fashion,” she opted for a glittering rose gold gown by Oscar de la Renta, with a one-shoulder design covered in sequins with a dramatic pleated sleeve that turned into a train.

King is best known for her roles in the television shows “American Crime,” “Watchmen” and “Seven Seconds,” all of which she won Emmy Awards for. She also won the Golden Globe Award and Academy Award for Best Supporting Actress for her role in “If Beale Street Could Talk.”

In 2020, she made her feature film directorial debut with “One Night in Miami,” which received three Oscar nominations.

Click through the gallery above to see some of Regina King’s best fashion looks over the years.