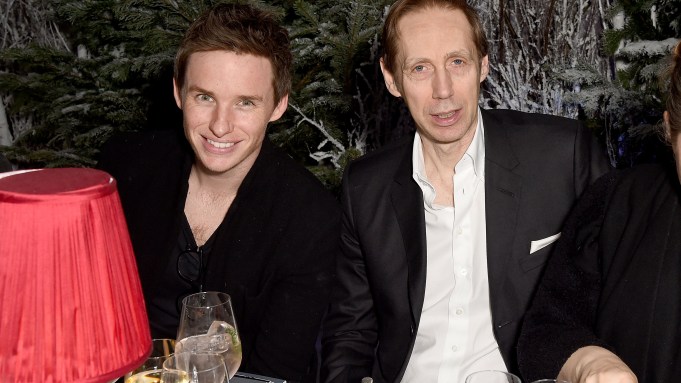 REINDEER REIGN: Amid the boughs of snow-dusted branches and garlands of frosted foliage, it was impossible not to feel a little bit festive at the return of The Reindeer, an immersive temporary Christmas dining affair by Bistrotheque, the London restaurant that’s now more institution than eating establishment.

“I love Christmas,” said Tallulah Harlech, who has been busy styling shoots for Pop and Adidas, and working with designer Barbara Casasola. “I go home for the carol service at the church across the road, and we still decorate the tree with the decorations we made as kids. Mum [Amanda Harlech] got us to make them out of plastic milk bottle lids.”

Jeweler Shaun Leane is opting for more of a red hot and green Christmas: “I’m going to South Africa for three weeks,” on safari, he said. “We’re going to drive down from Johannesburg through the Karoo [region]. It’s time for a nice break.”

The evening was presented by — and in aid of — Sarabande, the Lee Alexander McQueen charitable foundation that helps students hoping to work in the creative industries. Gareth Pugh and his partner Carson McColl stood by Tord Boontje’s fang-shaped Ketel One Bar, taking in the wintry scene created for Sarabande earlier this year.

“We won’t be doing anything special for Christmas,” Pugh told WWD. “We’ll be working on the next show, which is going to be something special. But we did just get back from a trip to Wahaca in Mexico where we drank a lot of mezcal and went skinny dipping — so that’s something.”

Bistrotheque first opened The Reindeer in 2006, and it was one of London’s first pop-up restaurants, a three-week immersive Christmas dining and entertainment experience at Old Truman Brewery.

The latest version — which takes place this weekend — features the work of Sarabande designers and artists-in-residence. All money raised from the ticket sales of The Reindeer 2016 will go to Sarabande.

The Reindeer is taking place on a more modest scale this year. Some 400 people will attend two dinners and one lunch, which includes a six-course menu created by Bistrotheque’s head chef Blaine Duffy.