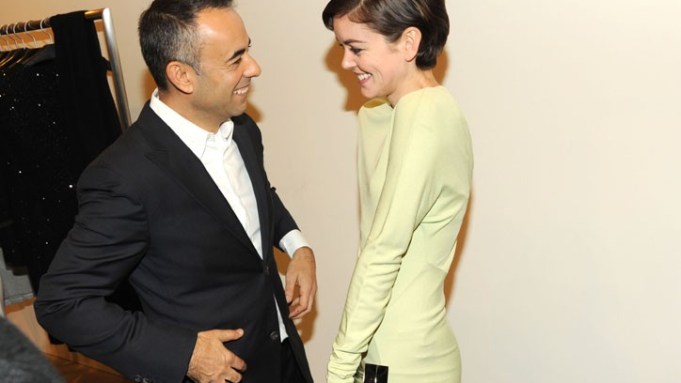 RELIGIOUS STUDIES: On Wednesday night, Nora Zehetner, Shala Monroque, Melissa George and Hanneli Mustaparta were at the Calvin Klein Collection store on New York’s Madison Avenue, where Francisco Costa and Stefano Tonchi feted the “Minimalism and Fashion: Reduction in the Postmodern Era” book. “You couldn’t ask for a better space,” its author, Elyssa Dimant, said about the John Pawson interiors. “It’s been called the temple of minimalism so many times. Maybe tonight my book could be its bible.” The look had its religious followers, but few pulled it off better than original Calvin doyenne Sheryl Schwartz, who wore one of Costa’s white dresses with bold black bangles.

MAN OH MAN: Ann Demeulemeester is fortifying her men’s department. According to market sources, the Belgian designer has tapped Sébastien Meunier from Maison Martin Margiela to head up men’s wear.

MONTANA REVISITED: Claude Montana made an appearance at famed tearoom Angelina on Tuesday night to sign copies of an illustrated book showcasing his work. The reclusive designer said he felt especially “touched” by the location, since many of his runway shows were staged at the Parisian institution. With several of his original designs on display, the 100 or so attendees got a taste of provocation along with their champagne. The release is timely, seeing as the epic proportions of his designs, considered revolutionary in the late Seventies, are nothing short of ubiquitous today. Commenting on this resurgence, Montana said he was simply “happy to have been the first.” The book, published by L’Editeur in France, will be released by Thames & Hudson in the United States in April.

DEALING THE BLOWS: Editors, socialites, British expats, a pregnant Gretchen Mol and at least one man in fanciful headgear — a top hat affixed with antlers — were among those gathered at Anthropologie’s Rockefeller Center store Wednesday night to hear Detmar Blow, widower of Isabella, read from his book “Blow by Blow,” co-written with Tom Sykes, who was also there. Inside was a temporary gallery of photos taken throughout Isabella’s life, as well as two of her hats. Chapter 16: “Issy Loves New York,” was Blow’s apropos choice for the occasion, which marked the book’s launch in the United States. On the subject of the other Isabella Blow book, “Isabella Blow: A Life in Fashion,” by Lauren Goldstein Crowe, which has been optioned for a film, Blow didn’t mince words: “I have no interest.”

BIG BUCKS: Bulgari’s charity gala dinner Wednesday night for Save the Children raised more than $700,000, adding to the $8.3 million raised in 2009, a sum the Italian fashion house aims to double by the end of next year. The event was peppered with local and international celebrities, including Julianne Moore, Valeria Golino and British-Italian actress Katy Saunders, with a musical performance by Lenny Kravitz.

PRABAL GIVES BACK: Prabal Gurung’s success as an emerging designer can be measured in several ways, such as recently adding two more employees to his now seven-person New York-based team, or having First Lady Michelle Obama and a list of Hollywood starlets as customers. But one of Gurung’s chief measures of moving ahead is in his native Nepal, at a factory that produces the lightweight cashmere in his collection, like that for the poppy and sky blue sweater dresses ($925) and slouchy pullovers ($650) that opened his spring runway show. “We started with two people in the factory, and now there are 10. That’s 10 families being supported,” said Gurung, in San Francisco for a trunk show on Thursday at Neiman Marcus’ Union Square location. Additionally, Gurung and his siblings have started a Nepalese foundation to support education and leadership there. So committed to the cause, Gurung this summer spoke at an Entrepreneurs for Nepal conference in Kathmandu.

ASIAN EXPANSION: John Galliano will be adding seven new Galliano boutiques to its Far East roster. First up is a 1,100-square-foot flagship at the Plaza 66 shopping center in Shanghai — the brand’s first in the city — slated to open later this month, to be followed shortly by Hong Kong’s second location at the Times Square mall. Over the past few months, there have also been openings in Osaka and in the cities of Kunming and Wenzhou in China as part of the designer’s expansion strategy in Asia.

RUFUS WAINWRIGHT’S FASHION BOOK: Rufus Wainwright’s personal style will be on full display in his forthcoming book, “A Day in the Life of Rufus Wainwright.” In addition to posing in costumes that Viktor & Rolf and Zaldy created for his tours, he’ll model a slew of Marc Jacobs bags. “I have a lot of Marc Jacobs bags,” he explained. Wainwright got a primer on throwing a book party at the soiree he hosted Wednesday night at the Chateau Marmont in L.A. for Seventies icon Cherry Vanilla’s new book, “Lick Me: How I Became Cherry Vanilla.” Declining Vanilla’s advice to don a slimming vest by Aiko, Wainwright paired a plaid jacket by Viktor & Rolf with leopard-print skinny jeans to greet guests including Tatiana von Furstenberg and Angie Bowie, David Bowie’s ex-wife.

GOING GILT: Joy Gryson of Gryson handbags and designer Alex Toy have launched A.Toy, a specialty unisex line of Italian leather handbags and satchels for fall 2010. Gilt Groupe introduced the collection earlier this week at full price on both the men’s and women’s sites. The debut collection offers six different handmade styles of washed and unwashed lambskin bags in a muted palette of browns, blacks and beiges. Only 99 bags will be created in each style, ranging between $495 and $695, and buyers will receive a $100 credit to be used toward future Gilt Groupe purchases.

FROM PRINT TO TV: Rob Shuter’s “Naughty But Nice” column from AOL’s PopEater.com will soon hit the small screen. Filmed at Rare restaurant, Shuter’s half-hour show will combine cocktails with celebrity news and gossip and have 12 initial episodes. It debuts Nov. 6 on HDNet.com.