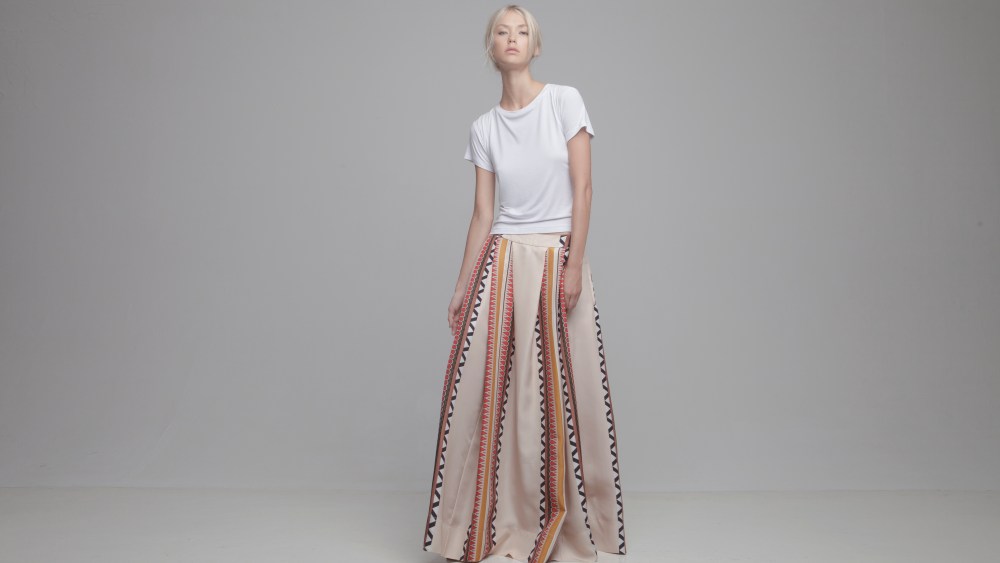 SUMMER ON-THE-GO: Kalita, the resortwear label launched last year by Kalita Al Swaidi and Raechel Temily, has made its debut on Moda Operandi as part of the e-tailer’s “Beyond the Beach” online trunk show.

The trunk show on Modaoperandi.com, which ends Monday, features pieces such as maxiskirts, embroidered caftans and palazzo pants that can be worn from day to night.

Al Swaidi and Temily created a limited-edition printed maxiskirt — the “Rio” — that will be stocked exclusively on the site during the show. It features hand-drawn geometric prints in a palette of earth-toned colors and a loose, airy silhouette that is characteristic of the brand.

Other brands featured in the trunk show include Dubai-based label Mochi known for its colorful embroidered creations, Lisbon-based Christophe Sauvat, and Alix of Bohemia, known for its handmade, folk-inspired jackets.

Elizabeth Leventhal, general merchandise manager of Moda Operandi apparel, said swim and resortwear brands such as Kalita have been gaining traction because they take a lifestyle approach, offering pieces that can be worn beyond the beach.

She called Kalita’s designs “the essence of resortwear” and pointed to one of the brand’s cover-ups, which is “elevated enough to double as a dress for the evening. This is what our woman aspires for when on holiday.”

Leventhal added that over the past few seasons there has been a rise in the versatility of pieces. “Brands are evolving collections to have more depth. Kalita collections embody this idea perfectly — the pieces are great for the beach, but can be worn in many other settings and it’s this versatility that speaks to our client.”

London-based Al Swaidi, a former lingerie designer, launched the brand alongside her friend Raechel Temily, who spends most of her time in Bali. Their aim was to create pieces that are comfortable, flattering on different body shapes, and adaptable to different lifestyles, whether they are lounging in Bali or on-the-go in London.

“We weren’t interested in making sexy clothes that men would like. Everything is cut at the bias, it has stretch and it’s designed to flatter a woman’s body. We like dressing like boys,” said Temily, who tends to match her Kalita silk-taffeta maxiskirts with sneakers and T-shirts.

For the label’s resort 2017 collection the focus was on maxidresses which came in many different shapes and forms. There were linear A-line silhouettes in cotton-voile with pockets to enhance comfort, Grecian-inspired silk pieces in skin-toned colors, as well as more voluminous, dramatic shapes featuring ruched peplums at the hem.

The brand is also stocked on Matchesfashion.com and in hotel boutiques at key holiday destinations including One and Only Resorts in Bali and San Diego and Le Guanahani in St. Barts.