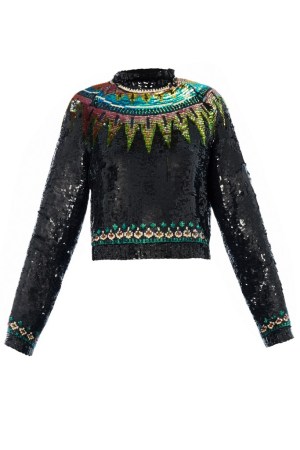 Blvck Paris Enters U.S. with Pop-up at Showfields in Miami

BUGLE BOY: British retailer Matchesfashion.com and the Los Angeles vintage store Decades are highlighting the designs of Jean Paul Gaultier ahead of a retrospective dedicated to the Frenchman next month at the Barbican in London.

Decades founder and owner Cameron Silver has handed pieces from his Gaultier archive to Matchesfashion.com for an installation that runs until April 9th at retailer’s Marylebone shop.

The 85-piece collection ranges from corsets to dresses, and from the Eighties to the present day. It will be available for purchase exclusively through Matchesfashion.com. Prices start at 187 pounds, or $310, for an Eighties men’s velvet motorcycle jacket to 3,550 pounds or $5,900, for a Nineties women’s embroidered pullover.

On Monday night in London, Matchesfashion.com marked the launch with a party at its Marylebone store with guests including Charlotte Dellal and Stephen Jones.

Silver, decked in Gucci and Gaultier, said he built his Gaultier closet by collecting runway samples. “They were never really produced, especially the bugle-bead pieces,” said Silver. “Just imagine who wore these in editorials, and I wonder if they wore underwear!” he said, referring to the body-con silhouettes.

The Barbican will stage “The Fashion World of Jean Paul Gaultier: From Sidewalk to the Catwalk” from April 9 through Aug. 25.