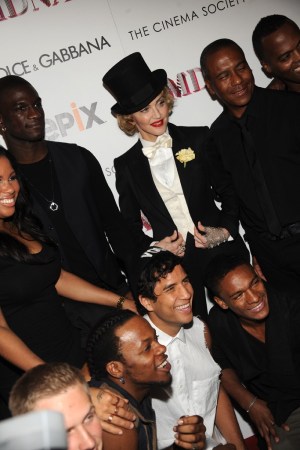 TRUE BLUE: The first few rows at the Paris Theatre for the Cinema Society screening of Madonna’s new “MDNA Tour” movie were reserved for hard-core members of her fan club who follow her around the world. Also on that roster of traveling devotees is Givenchy’s Riccardo Tisci, who flew in from Paris on Tuesday for the premiere. “I’m preparing my show and I came here just for this. I’m very jet-lagged,” said the designer, who created costumes for Madonna’s previous “Sticky and Sweet” tour and praised her muckraking for progressive causes. “But we are close friends and friends need to support friends. I’m going back tomorrow.”

Madonna donned a tuxedo by Tom Ford for the event, in homage to Marlene Dietrich, and accessorized with a uniformed marching band to herald her arrival on stage. On hand for the movie or just the after-party at Harlow, sponsored by Dolce & Gabbana, were John Travolta, Lazaro Hernandez, Jenna Lyons, Kelly Osbourne, Andy Cohen, Adam Lambert, Rachel Roy, Sky Ferreira, Johan Lindeberg, Catherine Malandrino, Nicky Hilton, Debi Mazar, Ellen von Unwerth and Lauren Remington Platt. Martha Stewart was at the theater but departed after waiting over an hour for Madonna’s late arrival.

Pondering Madonna’s three decades as a superstar, Salman Rushdie pointed to her early years as a high point. “I go back a long way. I like ‘Desperately Seeking Susan’ Madonna,” said the author.