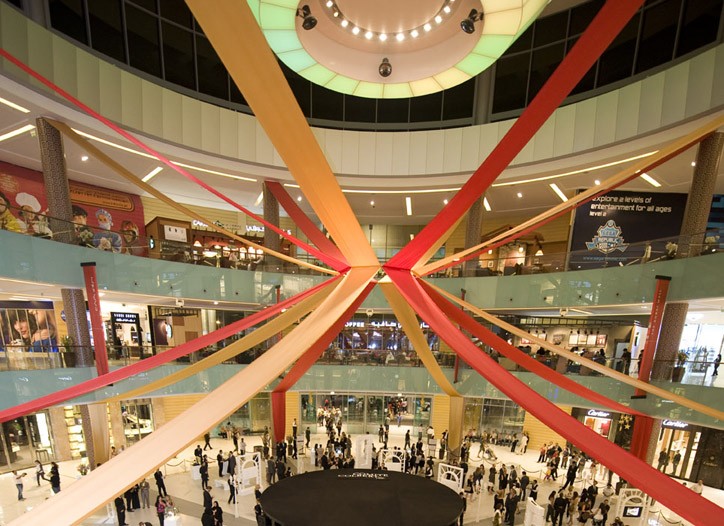 RICH PICKINGS: France’s top luxury brands joined forces to kick off a weeklong festival at the Dubai Mall showcasing the best of French craftsmanship. Cartier, Chanel, Louis Vuitton and Hermès were among the 29 brands that contributed rare creations to an exhibition titled “Les objets de rêve” (“Dream objects”) at the mall, which bills itself as the world’s largest, with a footfall of 5 million visitors a month. Organized by the Comité Colbert, the event grew guests such as His Highness Sheikh Majid bin Mohammed bin Rashid Al Maktoum, chairman of the Dubai Culture & Arts Authority and son of the emirate’s ruler; Alain Azouaou, France’s ambassador to the United Arab Emirates, and Patrick Chalhoub, joint ceo of the Chalhoub Group. Comité Colbert president Elisabeth Ponsolle des Portes said the Middle East represented 8 percent of the total turnover of the organization’s 75 members. “The Dubai Mall has the highest concentration of Comité Colbert member brands anywhere in the world,” she noted. “Our presence here really illustrates our confidence in the market. The region has done well in weathering the global crisis.”

Items on show included a pair of Pierre Hardy sandals made from a single peacock feather and a limited edition candelabra designed by Ora-ïto for Christofle.

BUSY BEE: Donatella Versace, who arrived in New York on Wednesday, is making the most of her long weekend in the city. The designer, who is receiving a Glamour Women of the Year award at Carnegie Hall on Monday night, is embarking on quite a media blitz over the next few days. On Friday, Versace will join the hosts of ABC’s “The View” in their daily Coffee Klatch ritual and present a mini-runway show with five of her favorite fall looks. On Monday morning, she will appear in the fourth hour of the “Today” show on NBC, where she will discuss her award with Glamour editor in chief Cindi Leive. Finally, just before she leaves town, she will be in a segment on CNN’s “The Joy Behar Show” on Monday night.

FERRETTI IN MOSCOW: Alberta Ferretti has opened a second boutique in Moscow, in the GUM department store on Red Square. Ferretti presented her fall 2010-2011 line at a private showing in GUM’s grand halls last week to mark the occasion. The audience, comprised of top Russian government officials and entertainers, particularly marveled at the select wedding gowns presented by the designer.

MAKING THINGS RIGHT: The Gen Art Foundation, which entered Chapter 7 bankruptcy last May and abruptly shut its doors, will host the Gen Art Resurrection Benefit at Good Units at the Hudson Hotel in New York tonight. The event’s honorary host committee includes Edward Norton, Jeremy Renner, Michelle Smith, Kate Mara, Whitney Port and Vena Cava’s Lisa Mayock and Sophie Buhai. DJ Reach, a longtime Gen Art supporter, will spin, and the event will feature a live photo shoot/model vignette, with models in different states of dress and undress, body painting and photography by Jordan Betten of Lost Art. Fashion photography by Miles Ladin will also be on display. All proceeds from the benefit will go to emerging filmmakers and designers who lost money when Gen Art became insolvent in May. A group of filmmakers and designers suffered monetary losses, and winners from the 15th Gen Art Film Festival last April didn’t receive their awards. According to Gen Art co-founder and chief executive officer Ian Gerard, “We expect it to fully reimburse any designers for losses suffered and hope that it removes the small mud stain created on an otherwise strong record of supporting emerging fashion talent for 15-plus years.” Gen Art has been in talks with several strategic acquisition purchasers over the last few months, and the company expects to solidify an acquisition later this fall, and relaunch the business.

JEAN GENIE: Julia Sorkin’s home was awash in starlets for the launch of Decades Denim on Tuesday, including Lake Bell, Jennifer Morrison, Eva Amurri, Ashlee Simpson (sporting a new pixie cut), Rachel Griffiths, Debi Mazar and Cheryl Tiegs. Though Cameron Silver’s latest venture is far more accessible than vintage couture (jeans retailing for under $200), his ladies showed their support. “If he opened a taco stand, I’d be here,” said Griffiths, while Bell extolled the virtues of the minimalist jeans, the antithesis of overdone premium denim that often gives L.A. fashion a bad name. “It’s clean and chic and does not have extraneous branding and accoutrements. There’s no huge logo on the ass,” she said.

OUT OF AFRICA: Nicole Miller threw a cocktail party last week in her SoHo store to trumpet the work of two Kenyan artisan cooperatives, Cocoki and Covanya, that make the multicolored bangles and bracelets her company is now selling. Some proceeds from the gathering were donated to Indego Africa, the nonprofit the designer has teamed up with that empowers Rwandan women. Miller is selling its products in her 12 boutiques and on her Web site.

Before Cape Verdean singer Fantcha Mendes performed for the crowd, Indego Africa reps told Miller how each cooperative helps 40 women, including one who was recently accepted to the Goldman Sachs 10,000 Women Program, which teaches underserved women about business and management. That individual used to carry water 12.5 miles for 25 cents a day. Having sold Afghan scarves and Malian bracelets, Miller regularly makes a point of assisting the impoverished. “I always try to do private industry projects that are empowering women. We are helping women to help themselves,” she said.

COLD COMFORT: Weatherproof is set to kick off its latest weather-related marketing gambit today with its “Pay the Temperature” promotion at the Macy’s flagships in New York, Chicago and San Francisco. As part of the retailer’s Men’s Style Event, customers will be able to purchase any men’s Weatherproof jacket in the Herald Square, State Street and Union Square stores with the price matched to the outside temperature on Weatherbug.com. Shoppers will pay the full retail price at the register and then receive a mail-in rebate for the difference in the form of a Macy’s gift card. “I hope the temperature doesn’t dip too far next Thursday night. If it does, I might be in big trouble,” said Weatherproof president Freddie Stollmack, who has garnered plenty of publicity from previous promotions such as 2008’s “If it’s freezing…it’s free” ploy.

FACE FORWARD: Actresses aren’t the only recognizable faces chez Lancôme. Joining a roster that includes Penélope Cruz, Julia Roberts and Kate Winslet is Julia Restoin Roitfeld, who will make her debut in an advertisement — shot by Mario Testino — for the L’Oréal-owned brand’s Ultra Lavande Spring 11 color collection out early next year worldwide. Also in 2011, Restoin Roitfeld is to appear in a campaign in Asia for the Lancôme Blanc Expert line.