The line was created by DJ Kygo and Myles Shear in 2016.

Rickie Fowler in pieces from the Puma x PTC collection.

Rickie Fowler has always stretched the rules of fashion on the golf course. When he turned pro more than a decade ago, he shook up the rank-and-file with his long hair, oversized Puma caps, boldly patterned pants and signature bright orange Sunday outfits, a nod to his alma mater, Oklahoma State University.

Even though “Little Rickie” is now all grown up — he’s 32, married and opts for a more conservative hairstyle — he still likes to push the envelope a bit in his style. And next week at The Players Championship, Fowler will be sporting looks from a new Puma Golf x PTC collection that he helped created with DJ Kygo and his manager and business partner, Myles Shear.

This is not the first time Fowler has worked with Kygo. Last summer, the two signed on as co-owners of The Long Drink, a Finland-based spirits brand, that was being launched in the U.S. And he’s also been a fan of the PTC brand since it was created in 2016.

“I’ve been involved with the PTC for a while and enjoy the laid-back, streetwear vibes of their gear,” Fowler told WWD. “I thought it would be a great match with Puma’s on-course credibility, performance, and style to bring the two worlds together. And it turned out great.”

Although Fowler doesn’t fancy himself a designer, he was involved in creating the line. “It was a collaborative effort, I had a vision for what I thought this could be, and Puma and PTC took those ideas and did a great job bringing them to life. We nailed it.” 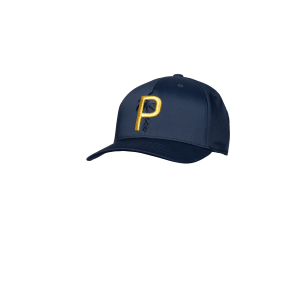 Rickie Fowler was involved in the design of the line.  Tiffany Pond

Even so, the line had to adhere to the rules of golf attire. “Puma Golf does a good job using cool, sophisticated graphics on more traditional golf silhouettes that are still functional and appropriate for golf, yet push the boundaries a bit on the style side,” Fowler said. “At the same time, golf style is definitely changing, and I like to be at the forefront of that. I like to push the boundaries at the right place and time while still being respectful of the game.”

Fowler admits that now that he’s in his 30s, his style has evolved. “I still love wearing color and bold graphics, but these days it’s a bit more sophisticated than the head-to-toe bold style from when I first turned professional.” And when he’s not competing, he said his primary goal is to “be comfortable, and wear gear that I can run errands in, relax in or go for a quick nine with the boys. Apparel that works for all aspects of my life off the course.”

Shear said he met Fowler a few years ago after he realized the golfer was a big Kygo fan. “I decided to reach out and offer him to come see one of Kygo’s shows in Las Vegas. We’ve been really good friends ever since and could not be happier to have worked on this collection together.”

He said PTC is “rooted in the friends and family who have supported the brand and what we are building since the beginning of the journey. We wanted to do this collection because it brings together two huge audiences. All of us who worked on this project felt like it was unique and exciting for each of our fan bases to experience. All of us worked collectively, whether it be myself/Kygo/Rickie/PTC/Puma to build a collection we were excited about. We were all very hands-on with the design process and how we wanted to portray the brands together to the world.” 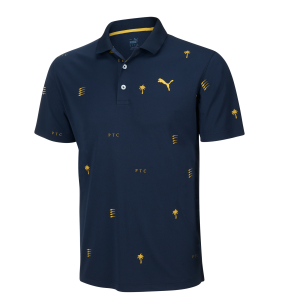 A polo from the Puma x PTC collection.

Shear said because Fowler “has always been known for being a fashion icon in the golf space,” this capsule has the “opportunity to further make golf cool. We wanted to bring the tropical vibes to the golf course and make it fun.”

The line includes apparel, footwear and accessories in a deep navy with gold details and a Puma and PTC palm tree logo on each piece. The line includes a polo for $85, a crewneck for $95, a snapback cap for $35, a stretch belt for $32, Money Bag shorts that feature a $100 bill print on the lining for $80, as well as a bottle opener for $50, a fanny pack for $140 and a limited-edition Tour shoe for $220.

Fowler will undoubtedly be looking for a little luck by sporting the collection next weekend at The Players, a tournament he has won in the past. Fowler has been in a bit of a slump this season and is on the verge of missing the cut for the Masters next month, which would be the first time in his pro career. But Fowler, who is golf’s quintessential bridesmaid — he’s finished second at the Masters, the British and the U.S. Open and has never won a major — is hopeful that his fortunes may turn around. “The Players is one of my favorite events on the calendar,” he said. “I’m very proud to be a former champion and look forward to competing to add another Players Championship.”

And he’s also eager to welcome fans back to the courses. “It was very different — in some aspects easier,” he said of playing without spectators, “but overall I look forward to fans back cheering us on.”