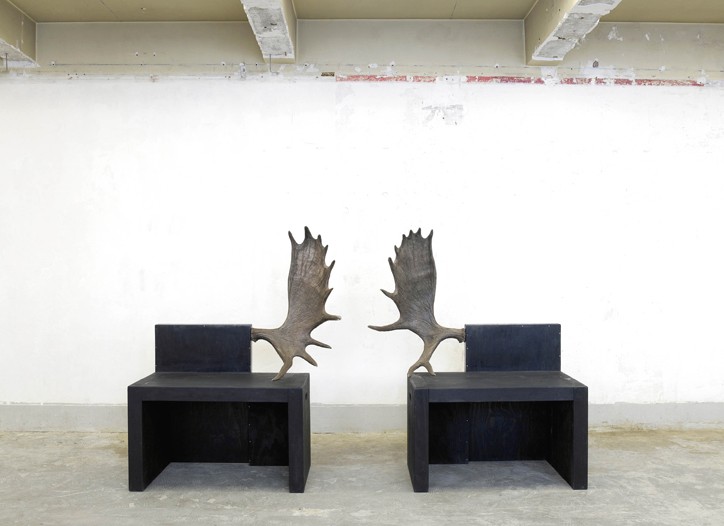 HOME DEPOT: Angelika Taschen got a jump on what looks to be Berlin’s biggest and most boisterous gallery weekend with a show of Rick Owens’ furniture — all loaned for a week from the designer’s home and headquarters in Paris. Production commitments — set awry by the volcanic cloud — kept Owens from attending the opening Sunday night at Apartment, Berlin’s mecca of fashion cool. But the city’s most creatively style-conscious crowd came by to check out the first German view of Owens’ live-in designs. Created for his personal use and now exclusively sold in limited editions by the Paris gallery Jousse Enterprise, the pieces include Owens’ black plywood “Stag benches,” each capped with a massive antlers; the simplest of plywood thrones; sleek Darth Vader-meets-Brancusi black-and-white marble lamps, and the polished brass and plywood dining-working tables. “I’m a big fan of Rick,” said an Owens leather-jacketed Taschen. “For me, he’s an artist. He has no boundaries. And his pieces are more like objects.”

The author and global style connoisseur featured Owens’ Paris universe in her 2009 book “New Paris Interiors” and intends to buy an Owens daybed in leather herself. “It’s so superexpensive I have to really plan it,” she confided. “But he really knows how to use leather. It’s like sitting on a cloud.”

WALK THIS WAY: The Yohji Yamamoto man is returning to the Paris catwalk. After a two season hiatus, the Japanese designer, who in April showed his fall men’s collection in Tokyo, is heading back to Paris in time for spring 2011 men’s fashion week, which runs June 24 to June 27. For the past two seasons, the label men’s wear has been shown commercially at its Paris headquarters. The exact date and time for the upcoming men’s runway show is yet to be confirmed.

HOUSE BEAUTIFUL: Susan Gutfreund, the New York socialite and decorator famed for her lavish parties on both sides of the Atlantic in the Eighties, is parting ways with her Paris triplex, with its jaw-dropping entrance hall and 18th-century grandeur, WWD has learned. The 5,200-square-foot apartment on the Rue de Grenelle is listed with Christie’s Great Estates, and boasts Versailles parquet, a professional kitchen and three bedrooms. Gutfreund, whose neighbors include her fashion pal Hubert de Givenchy, has been spending less time in Paris in recent years, but is said to be eager to keep a foot in the French capital and is searching for a smaller pied-à-terre. She could not be reached for comment.

MADE FOR WALKING: Isabel Toledo will finally unveil her Payless ShoeSource collection today, with an editor luncheon at Casa Lever. The designs promise to be “pure Toledo — playful, bold and strong,” she says, noting that comfort was a major must-have as well. “I’m a walker. I wanted to address that.” Set to launch in September at Payless stores and payless.com, the collection features seven shoe styles and two handbags. There’s the requisite nod to Toledo’s Spanish heritage — the Cuban heel gillie, for instance — as well as her sense of humor. The designer gave her accessories names such as “Almost a Slingback,” “Poodle Boot” and “Film Noir Bootie.”