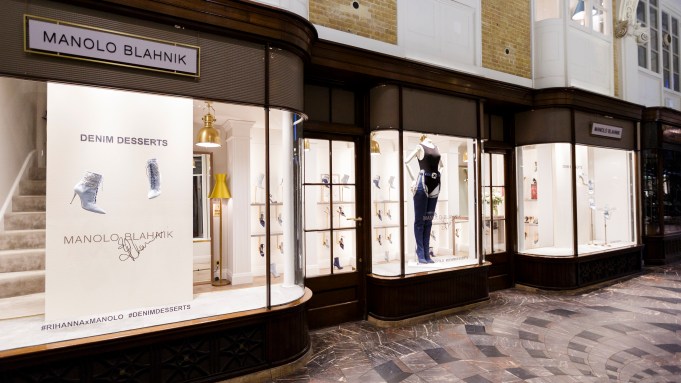 CRAZY FOR RIRI: The limited-edition footwear collaboration between Rihanna and Manolo Blahnik, which launched earlier this week, has caused the project’s dedicated microsite to crash several times.

A limited number of 400 pairs were stocked within each of the London, New York and Hong Kong units. In addition, the web site is taking special orders that will be delivered with a sketch signed by Rihanna and Blahnik. The brand would not provide sales figures or traffic numbers, however.

Kristina Blahnik told WWD sales have been “steady and constant” worldwide, “which is what we expected of a luxury, high-value product and the more-considered purchaser. In fact, when we went live on our microsite, it crashed a few times. It was all up and running again, but the volume of traffic was so high that it has taken us a little bit aback.”

She said the collaboration was seen more as a “pop project” and “to have fun” rather than a consumer-driven exercise.

The denim-driven collection, Rihanna x Manolo Blahnik, features sequins and embroidery influenced by Rihanna’s hand tattoos. They appear on designs including thigh-high boots and an open-toe sandal.The limited-edition capsule collection includes six styles, a selection of sandals, pumps and boots. Prices range from 650 pounds, or $940, to 2,950 pounds, or $4,265.

Blahnik said the strongest sales have been on the e-commerce platform, “which further proves Manolo and Rihanna’s global reach, even selling a pair in Vietnam. There has also been a rise in the seasonal fashion collection sold online, which demonstrates that the collaboration is bringing a more directional customer to the brand.”

Looking ahead, the brand plans to open a shops-in-shop in London at Selfridges, and is focusing on expansion into Asia. “In Japan alone we are opening a shop this year in Matsuya and we are having a shops-in-shop as well at Hankyu in Osaka.”