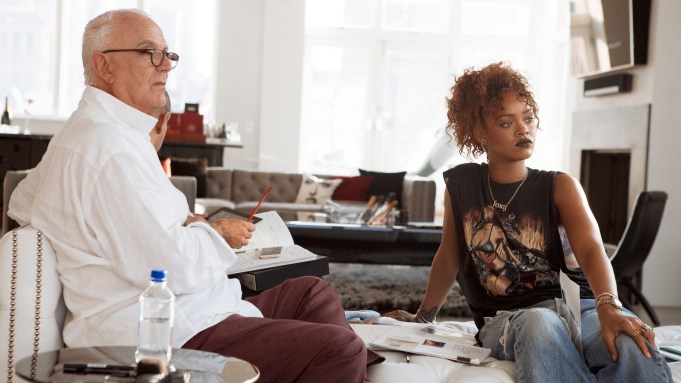 MANOLO BLUES: Having launched a collection for Puma at New York Fashion Week last month, Rihanna now has a very different footwear collaboration in the works with none other than Manolo Blahnik.

The denim-driven collection, Rihanna x Manolo Blahnik, will debut May 5. It features sequins and embroidery influenced by Rihanna’s hand tattoos. They appear on designs including thigh-high boots and an open-toe sandal.

The collection will be sold at Manolo Blahnik’s stores in London, New York and Hong Kong.

“The day I see a woman in the street wearing my shoes…I am sorry for that woman because I’m going to literally run after her, shouting, ‘Stop! Selfie! Who are you? Where did you get them?’ I’m going to have a moment,” said Rihanna in an interview that appears in the April issue of British Vogue.

Rihanna will appear on the cover of the magazine, which hits newsstands next Thursday. She was photographed by Craig Dean, styled by Kate Phelan and is pictured wearing a denim Alexander McQueen coat, Isabel Marant knitted hot pants and denim chap boots from the Rihanna x Manolo Blahnik collection.

This has been a major few months for Blahnik, who recently launched a handbag line, opened his second London store at the Burlington Arcade last month, and is the star of a documentary feature film being made by Michael Roberts.

Blahnik said the singer’s “drive, passion, creativity and style have been reflected in the designs, with fabulous results — I think everyone is going to love what they are about to see.” He declined to comment further.

Rihanna is certainly no stranger to brand collaborations. She was named the “most marketable celebrity” according to data from The NPD Group and became Puma’s creative director in 2014. She’s a brand ambassador for Dior, has worked with MAC Cosmetics, and designed a collection for River Island.