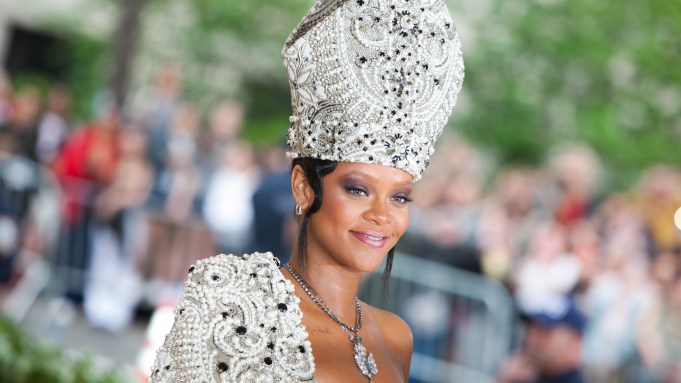 Throughout the 74 years of the Met Gala, there have been many iconic red carpet looks, but music and fashion star Rihanna has managed to consistently produce the most impressive, internet-stopping looks year after year.

Rihanna is arguably the most highly anticipated guest of the Met Gala, rightfully so given the number of dramatic looks she’s donned in the last few years. While it’s not confirmed if Rihanna will attend Monday’s Met Gala, which is celebrating the exhibit “In America: An Anthology of Fashion,” she will still likely be the most-anticipated arrival of the night.

The music icon, who is currently pregnant with her first child, started off her Met Gala reign with more subdued, traditional red carpet styles before transitioning into the dramatic, high-fashion looks spectators have now come to expect.

Rihanna made her Met Gala debut in 2007 for the “Poiret: King of Fashion” exhibit, where she attended wearing a Georges Chakra white dress embellished with silver gems and paired with short mesh gloves. Her next appearance happened two years later for “The Model as Muse” exhibit, where she wore a fitted tuxedo with sculptural shoulders by Dolce & Gabbana. She again went with a more subdued, yet elegant red carpet style in 2011 for the “Alexander McQueen: Savage Beauty” exhibit, wearing a black lace, one-shoulder Stella McCartney dress.

Her Met Gala red carpet style took a dramatic turn in 2015 for the “China: Through the Looking Glass” exhibit. Rihanna stunned on the red carpet wearing a bright yellow, custom Guo Pei gown, a look that has since become one of the most memorable in her overall style trajectory.

Rihanna seemingly upped the ante for her next Met Gala appearance in 2017 for the “Rei Kawakubo/Comme des Garçons: Art of the In-Between” exhibit when she arrived on the red carpet wearing an avant garde, floral petal-themed look by Comme des Garçons.

For many, Rihanna’s 2018 Met Gala outfit is considered her best of all time. For the “Heavenly Bodies: Fashion and the Catholic Imagination” exhibit, Rihanna left her mark on the red carpet wearing a custom Maison Margiela Pope-inspired pearl and jewel-embellished white dress with a matching mitre.

While we wait to see if Rihanna will return to the Met Gala this year, WWD looks back at the music icon’s Met Gala style evolution. Click through the above gallery for more.

A Complete History of the Met Gala