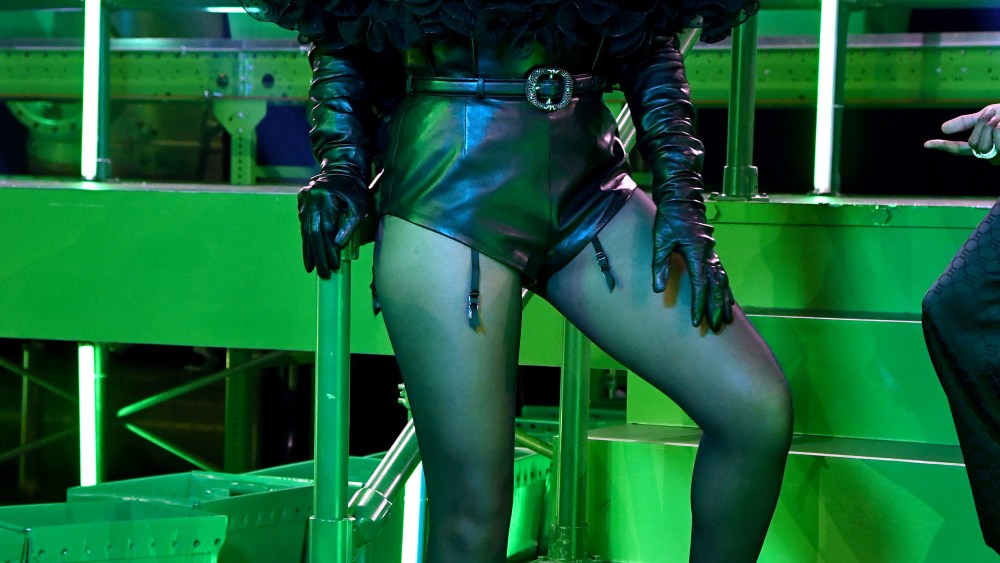 The multihyphenate-turned-mogul’s show, the second she’s done with Amazon and her third overall, was arguably her most impressive feat to date, given the large-scale production with a sizable group of dancers, performers and celebrities that came together amid the coronavirus pandemic.

Here, WWD looks at some of the standout celebrity appearances in Rihanna’s Savage X Fenty Show Vol. 2. Read on for more and click through the above gallery for red carpet photos.

The New Zealand-based choreographer and model opened the show dancing along to a voiceover defining a “savage” while modeling a black lingerie set with an illustrated mesh top and fishnet tights.

Rosalía took the stage for the show’s first performance, wearing a black lace lingerie set, bike shorts and a robe paired with chunky silver jewelry. The singer performed her songs “Relación” and “TKN.”

Rapper Big Sean took the stage to model the brand’s smoking jacket and satin pants as part of its new men’s wear collection.

Latin singer Bad Bunny took the stage to perform one of his newest songs, “Yo Perreo Sola.”

The model returned to Savage X Fenty in the show’s Garden of Eden-themed set dressed in a floral, lilac-colored lingerie set while holding a floral-adorned boa.

Miguel took to the Garden of Eden set to perform two of his hit songs, “Adorn” and “Waves.”

Paris Hilton joined several celebrities during the show’s closing number — which was held in a makeshift neon-green factory — dressed in a bright pink lingerie set.

Drag queen Gigi Goode, who placed second in the 12th season of “RuPaul’s Drag Race,” walked down a makeshift runway among dancers while dressed in a blue, leopard-print set.

The rapper then took to the stage, modeling a blue lace bra and boxer briefs.

Model Irina Shayk appeared for the second time in the dance sequence, walking on a neon-green table while modeling a black lace bra, sequined shorts and a robe.

“The Real Housewives of Beverly Hills” star and singer, Erika Jayne took to the makeshift runway dressed in pasties, a smoking jacket and matching bottoms.

Rapper Christian Combs, who worked with Rihanna on the brand’s men’s wear collection, joined performers dressed in the brand’s collection, which he complemented with a necklace that read “Sean John,” an homage to his father, Sean “Diddy” Combs.