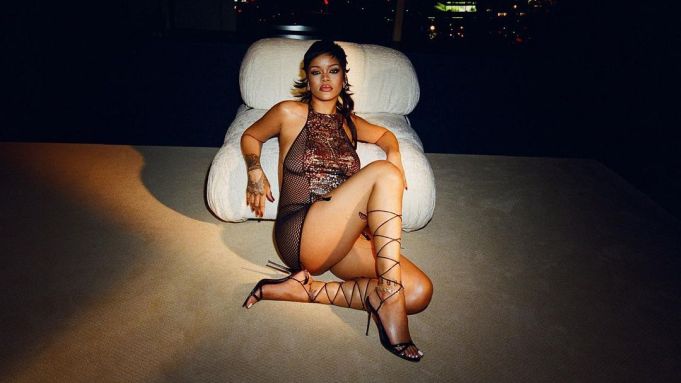 While she did not perform, Rihanna herself appeared in the lingerie fashion show — which was staged at the Westin Bonaventure Hotel in Los Angeles — modeling a pink snakeskin bodysuit while dancing alongside her backup dancers to “What’s It Gonna Be?” by Busta Rhymes and Janet Jackson.

Here, WWD breaks down some of the standout celebrity appearances in Rihanna’s Savage x Fenty Show Vol. 3. Read on for more and click through the above gallery to see red carpet photos.

Supermodel Cindy Crawford opened up the Savage x Fenty Show Vol. 3, walking up a spiral staircase wearing a teal blue maxidress. She strikes a pose at the top of the stairs before heading into an elevator.

Rapper Bia put on one of the many memorable musical performances during the lingerie fashion show. She took to the hotel dressed in a neon yellow lingerie set to perform her hit song “Whole Lotta Money.”

Normani followed up Bia with her own show-stopping performance of her hit song “Wild Side,” where she wore a jeweled yellow snakeskin jumpsuit and sang among a group of male dancers dressed in matching Savage x Fenty boxers and black trousers. Normani appeared in Rihanna’s last lingerie fashion show dressed in a bridal-inspired lingerie look.

After signing with CAA earlier this year, Lola León returned to the runway for Rihanna’s Savage x Fenty show. León, who is Madonna’s daughter, modeled a latex bra and multicolored thong accessorized with thigh-high boots and chain jewelry.

The next clip of the Savage x Fenty show went to model Emily Ratajkowski sitting in the backseat of a car driving through Los Angeles. Ratajkowski was dressed in a fuchsia-colored robe with a matching bra and underwear. She later joined a group of other models and walked down the runway.

Olympic skateboarder Nyjah Huston appeared skateboarding behind Ratajkowski’s car. Huston matched the model in fuchsia-colored boxers and later joined a group of models on the runway.

“Hollywood” actor Jeremy Pope joined a group of male dancers during the show for a sequence, matching them in red trousers.

Fresh off her New York Fashion Week return, Gigi Hadid also returned to the Savage x Fenty runway in a scene where her image was mirrored three times before walking the runway. Hadid was seen wearing a blue metallic robe with matching bottoms.

Precious Lee later joined Hadid on the runway, wearing a metallic blue bra and skirt as she walked through a group of dancers dressed in blue fishnet bodysuits designed with a star motif.

Australian musician Troye Sivan was another that made his runway debut during the show, walking in silver metallic boxer shorts among models wearing purple printed boxers.

Ballroom dancer Leiomy put on one of the most memorable performances of the Savage x Fenty show, voguing down the runway dressed in a pleated silver top and matching skirt.

A Look Back at the Celebrities That Modeled in Rihanna’s Savage x Fenty Show Vol. 2

Why Rihanna’s Fenty Fashion Label Is Taking a Pause