The singer at the Chanel couture show gave the thumbs-up to the designer’s new look, with Marion Cotillard and Isabelle Huppert also in attendance. 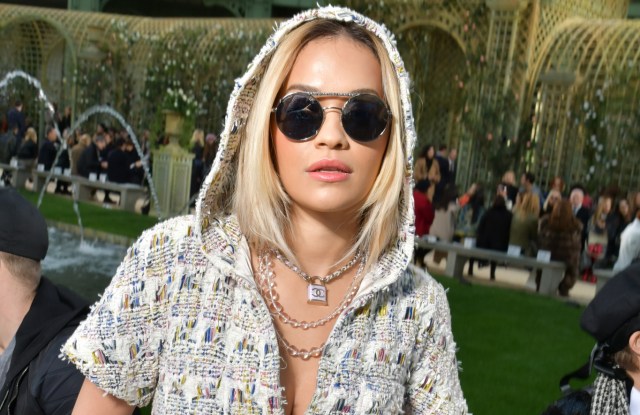 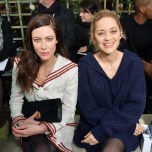 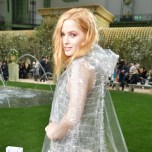 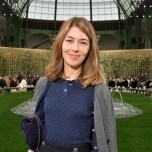 But not everyone was happy about it.

“I was trying to do a rain dance this morning because I really wanted it to rain,” sighed Ellie Bamber, dressed in a checked minidress and frilly sheer plastic cape. The actress, who is about to start filming a BBC adaptation of Victor Hugo’s novel “Les Misérables,” in which she’ll play Cosette, described the show as an “emotional experience.” “With the music and the set, it’s so fairy-tale and beautiful. And I loved all the collection’s details, down to the boots with the Perspex heels, the bits of sparkle and flowers.”

A hirsute Sébastien Tellier shared his opinion on Karl Lagerfeld’s new beard, which has been the talk of the town since he showed it at the Dior Homme show on Saturday.

“It’s a cool look for him, it’s a bit sauvage,” said the singer, whose album with Dita Von Teese is due out on Valentine’s Day.

Rita Ora said Lagerfeld’s whiskers fit with his general color scheme. “It’s amazing, I mean he can do no wrong, he’s so cool, I love him,” said the singer, who raved about the show’s makeup. “I was, like, I wanna be all peachy and girly.”

For her outfit, she’d opted for a tweed hooded minidress and sneakers. “Before midday, it’s definitely nice to be in a pair of sneakers,” said the singer, who was due to fly to New York directly after the show to attend the Grammy Awards. “I’m also doing a Spotify special with this record that I have called ‘Proud,’ that I made for the Open Mic Project, which is about individuality and giving people a voice to talk about their LGBT problems.”

The singer will be flying back to the U.S. on Feb. 6 for the premiere of “Fifty Shades Freed.”

When asked how the #MeToo movement is impacting the music industry, she replied: “It’s definitely trickling in and it’s about time, it’s been an ongoing conversation even since before I started in music. I feel like this fight has been going on for so many years and it’s really exciting to see people in the public sphere speaking out about it.”

Mouglalis stood nearby puffing on a cigarette. “We’re in a garden, no?” she said with a nonchalant shrug. She has just finished filming the second series of “Baron Noir,” in which she plays the president of France. “In order to have a woman as president, you have to show it in fiction so that it maybe becomes real,” said the actress. She also plays the lead in Franck Ribière’s “The Most Assassinated Woman in the World,” based on a Thirties “diva” who was one of the stars of the Grand-Guignol theater, which “used to stage really dark stories about murders.”

Still on a high from the show, Audrey Gelman, who runs The Wing, a network of women’s spaces, was in a lighter mood, meanwhile. “I think women feel like they have to be hard to be effective and there actually is something so powerful about softness. There’s such a confidence to it and an elegance,” she said, adding of the set’s fresh roses: “I’m an aspiring gardener, my goal this year is to not kill every plant I own. This definitely kicked it up a notch for me.”