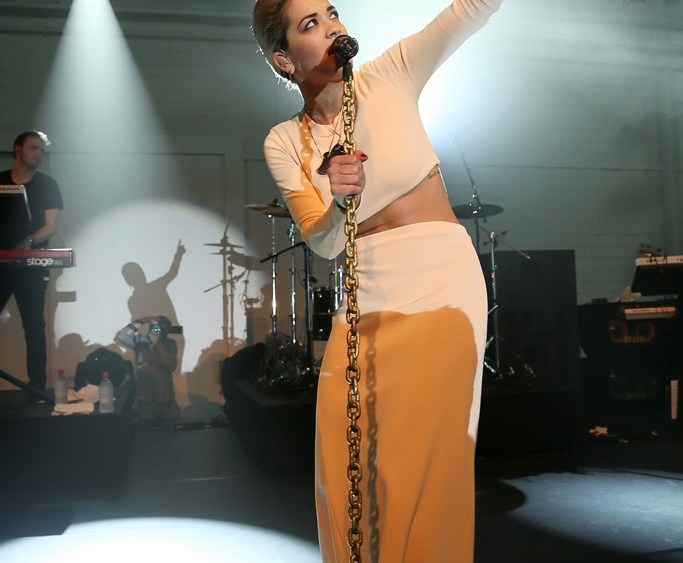 SHINE ON: Calvin Klein Watches & Jewelry feted its 2013 line with a warehouse party on Friday on the sidelines of the Baselworld trade fair in Switzerland, featuring a concert by Rita Ora, who looked sleek in a pale pink Calvin Klein Collection top and matching long skirt, though she confessed that performing in heels remains a challenge. “I’m always a bit of a street kid, because I grew up in a neighborhood where it was all about baggy jeans and beanies,” she told WWD while tucking into a bag of potato chips after the show. “Music was always the main vein of my life, but fashion to me was like a hobby, so I would always do research.”

The British singer, who appeared in the fall 2011 campaign for CK One jeans, is now equally comfortable in couture. She was among the celebrities who posed for Karl Lagerfeld in Chanel’s “The Little Black Jacket” project. But one thing she never goes without is her trademark red lipstick. Quoting a lyric from her song “Uneasy,” Ora explained: “The line is, ‘My makeup is my armor for the dramas that I always fight.’ It’s just saying that my red lipstick is almost like my mask for all the lifestyle dramas that I face, like everybody else.”

The Jay-Z protégé is preparing to perform at summer festivals across Europe, and recording the follow-up to her breakthrough album, “Ora,” for a fall release. “I’m in that phase where I feel like I’m a newborn baby again,” she said. “A second album is a very important time for an artist. It’s the point where it’s, ‘Are you sticking around, or are you going?’ It’s like the make-or-break, for me anyway.”

Ora revealed that she hopes to eventually follow in Rihanna’s footsteps by launching her own fashion range. “I really, really look up to her, the growth of her career and how she’s really planned everything out. She’s been around for ages and she’s just now releasing a label. To me, if I was to do that, it would be at a point where I feel like my music has spoken enough,” she explained.