The "Hot Right Now" singer said she's feeling more confident than ever at 25.

By Joelle Diderich and Miles Socha on January 25, 2016
View Slideshow 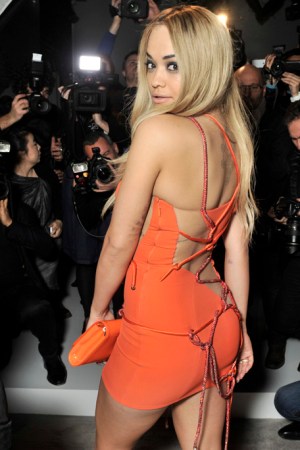 HOT RIGHT NOW: Rita Ora arrived at the Versace couture show in Paris on Sunday night wearing an orange cutaway mini dress that was slashed away to reveal a sliver of her hip tattoo. “It makes you feel hot. It makes you feel like exactly what Versace does – sexy,” she said with a grin.

The singer has been showing lots of skin lately – last year’s video for “Body On Me,” her duo with Chris Brown, showed her dancing topless wrapped in a Union Jack flag.

“I kind of just let life take its course. It’s just about how comfortable you feel at that time, and right now, I’m in a place where I’m really comfortable and I think, you know, I’m growing up a bit. I’m 25 and I’m just [beginning] to get started,” she explained.

Ora scored a coup when Louisa Johnson, one of her protégées, won the finale of the U.K. edition of talent show “X Factor” last month. “It feels great. I just feel like at least I can help someone do something, and that for me is an achievement,” she said.