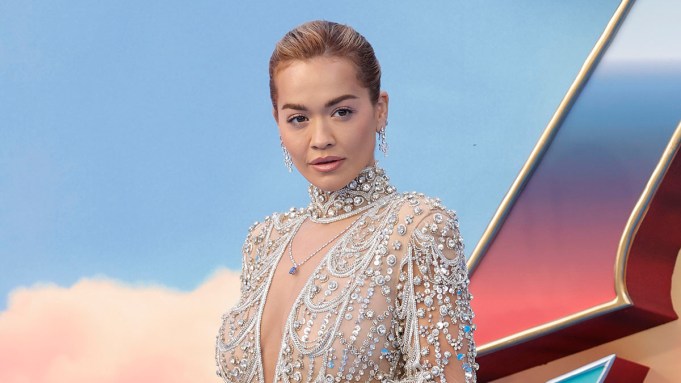 Rita Ora dazzled on the red carpet Tuesday for the “Thor: Love and Thunder” premiere in London.

The British singer accompanied her boyfriend, Taika Waititi, at the Odeon Luxe in Leicester Square wearing a look by Elie Saab. The dress, which is from the label’s spring 2022 couture collection, was a long-sleeve gown embroidered with jewels and sequins and fringe detailing. It also featured a plunging neckline and a high thigh slit. The couple wore accessories by Cartier.

She wore her hair up in a high bun to show off her drop earrings and platform sandal heels. She is usually styled by Karen Langley.

Earlier this week, Ora was making her rounds in Paris Couture Week, attending events and shows for labels like Schiaparelli.

The premiere for the film also saw its A-list cast members such as Natalie Portman and Tessa Thompson in attendance, while other celebrities such as Serena Williams and Regé-Jean Page also made appearances.

“Thor: Love and Thunder,” the latest film in the Marvel Cinematic Universe, marks Portman’s return to the franchise, reprising her role as Jane Foster, who turns into the female version of Thor. Her last appearance was in the 2013 movie “Thor: The Dark World.”

The movie also mark’s Waititi’s second time directing a “Thor” film, with the last one being “Thor: Ragnarok” in 2017, which was met with critical acclaim and commercial success. It became the highest-grossing film of the “Thor” movies.

The film will premiere in theaters starting July 8.

EXCLUSIVE: Rita Ora Collaborates on Footwear Line With ShoeDazzle, Opens Up About Struggles as a Woman in Music