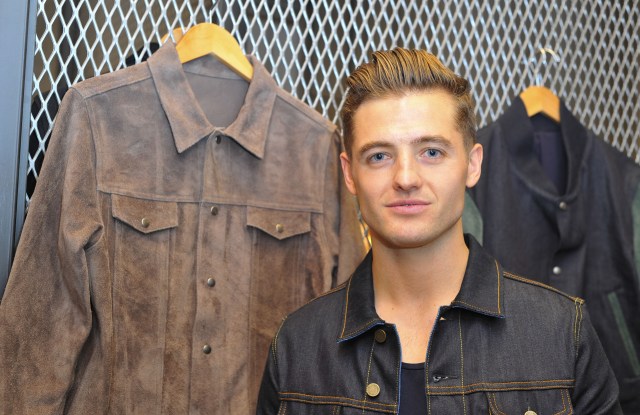 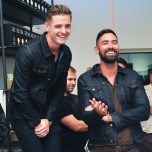 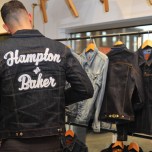 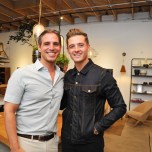 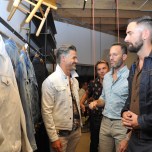 What do superheroes wear when they’re off the clock? If they’re employed by TV producer Greg Berlanti, they’d have their pick of the jackets in Hampton + Baker, the men’s fashion line started by Robbie Rogers and Warren Baker.

“He’s certainly put a lot of our actors off-screen in stuff,” said Berlanti, the executive producer of “Arrow,” “The Flash,” “Blindspot,” “Supergirl,” “Legends of Tomorrow” and “Riverdale.” Berlanti skipped last weekend’s Comic-Con for the first time in four years to prep his shows for the new fall season and attend Hampton + Baker’s trunk show at design store Stahl + Band in Los Angeles on Saturday night.

For his newest series, “Riverdale,” which is billed as a subversive take on the “Archie” comics, he asked that Hampton + Baker design something for the lead character portrayed by K.J. Apa. “You should make a bomber for Archie,” recalled Rogers, the L.A. Galaxy soccer player who is also Berlanti’s boyfriend. Of his fall collection’s $975 bomber jacket, which is crafted in the U.S. from Candiani Denim’s indigo-saturated cloth and a forest green suede from Italy, Rogers countered that “this one is more sophisticated.” It’s not a typical teenager’s uniform, unless they’re “high school students in Beverly Hills,” he said.

That’s not to say that Rogers hasn’t contributed to finessing the fashion in the Berlanti-Rogers household. Years ago, he cleaned out a third of Berlanti’s closet. Through his endorsement with Nike, he’s also stockpiled swoosh-emblazoned sneakers for their five-month-old son, Caleb. “He’s not even walking,” said Berlanti, whose simple motto for dressing is: “I try not to wear dad jeans.”

Fortunately, a number of men have foregone dad jeans for Hampton + Baker’s denim jackets that blend clean lines with subtle details. Only 30 pieces remained from the 150-piece run in its spring debut collection, which landed a bestseller with a $795 style in crisp white. Rogers said the goal is to start wholesaling for the fall season. “Being L.A. guys, we think it’s nice to have a few shops in L.A.,” he said.

Baker chose to throw on a blue number embroidered with his company’s name on the back. The British stylist works on the wardrobes of Norman Reedus, Evan Peters and Miles Teller, who threw the Internet into a tizzy when he premiered a new bleached hairdo at the ESPYs earlier this month. (“I just do the clothes. I don’t do the hair,” Baker said, evading a mea culpa for Teller’s recent transformation.) After hitting it off with Rogers on a fashion shoot, he embarked with him on Hampton + Baker, which rooted its nomenclature in the soccer player’s middle name and the stylist’s family name. “He’s not another sports guy doing a clothing line,” Baker said.

The guests at the party represented the fluid crossover between sports and style. Eric Rutherford and George Kotsiopoulos were chummy with Baker from working in the fashion business, and Andy Iro witnessed Rogers’ style evolution from their days playing together in England. “He’s always a little bit clean cut,” Iro said. With some of the tougher togs in the fall collection, “I like the fact he’s going more on the rugged side,” he added.

At 6 feet, 5 inches, the Liverpool, England-born Iro might have to ask Rogers for special concessions beyond Hampton + Baker’s small, medium and large sizes. “I know Robbie likes his things really fit,” he said. “We’ll see if I actually fit in anything.”