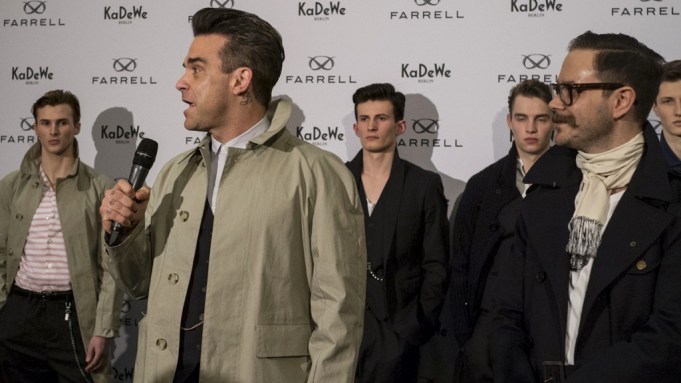 A MAN FOR ALL SEASONS: Robbie Williams touched down in Berlin Tuesday night, arousing a chorus of high pitched female squeals in the most unlikely of places: the premium department store KaDeWe. Williams was in the capital for the German launch of his men’s clothing line Farrell, which starting this spring, hopes to attract fans of the other gender at KaDeWe, and Karstadt doors in Hamburg, Dusseldorf and Nuremberg. Now in its fourth season, the down-home Brit collection is also available in 11 department and specialty stores in England, Ireland and Italy, and on Farrell.com.

Inspired by the singer’s granddad Jack Farrell, and co-created with former Burberry men’s designer Ben Dickens, Williams made no bones about the collection’s heritage twists and Swing Era flair. Nor its commercial bent. “For me it seemed a no brainer to make high quality stuff affordable, but I didn’t know it would be unique. I fell on a lucky formula,” he said of the range where a tailored cotton canvas jacket with functioning buttonholes carries a 250 pound, or 300 euros price tag, or his favorite roomy, back-buckled pants go for 95 pounds or 115 euros. “It’s about good wardrobe pieces real guys can rely on — and afford,” he remarked.

Asked if women’s fashion was in his sights, Williams’ answer was a qualified yes. “But first we have to get the men’s wear right,” he stressed. He and Dickens ruled out licenses, insisting they want to keep control of the business, but noted they’d love to open a store, an admittedly expensive enterprise that has them looking for a partner.

When it comes to expansion, their goal is definitely global. “We want global dominance. Like with my music,” Williams declared. “I was the fat guy in the band and I wasn’t expected to succeed, and I don’t see why this can’t be as big. I did it before and I want to do it again. Being successful is addictive.”

As to his goals in the singing department, where he said 60 million sold albums “can make me smile on a rainy day,” Williams will be back in the studio in March to work on a new release. He wouldn’t divulge further details, suggesting it would confuse the message of his current “Take the Crown” album and upcoming summer 2013 tour. “But I’m always a season ahead,” he noted. “Just like in fashion.”