Robert De Niro and Giorgio Armani go way back and the Oscar winner showed his support to the designer by attending his namesake show on Tuesday. 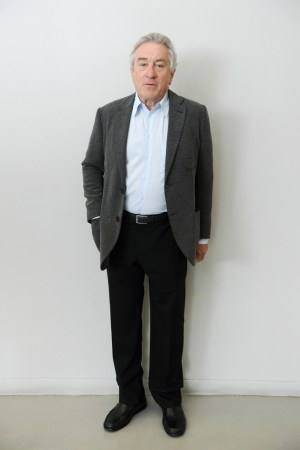 GOOD FRIENDS: Robert De Niro and Giorgio Armani go way back and the Oscar winner showed his support to the designer by attending his namesake show on Tuesday. “It feels right,” De Niro said simply and with a big smile about wearing Armani for so long. “There are a number of  projects I am working on, but first I will play [Bernie] Madoff on HBO,” said the actor.

After the show, Armani once again cautioned against “the easy, excessive game of provocation” of a number of designers. “It’s counterproductive,” he said, touting fashion that “you want to see worn by your brother, your brother’s friend or a professional who doesn’t want to look old, and wear more contemporary clothes.” Armani said he was very pleased he had received an unexpected  phone call from Italy’s president of the Chamber, Laura Boldrini. “She said she appreciated my work and how it represented Italy.” Asked by one reporter about Milan, Armani said he adored it, as it was a “small big city. The locales are all easily accessible, handy, but it’s also an important city where people work hard.”