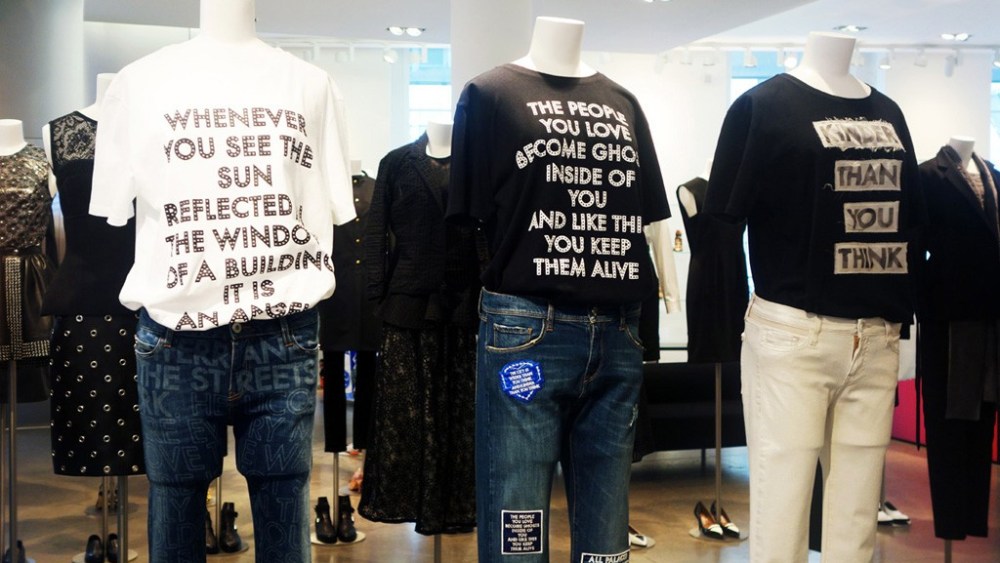 ART ATTACK: Scottish artist Robert Montgomery and his posse took over Colette in Paris Thursday evening for a cocktail party to celebrate the artist’s exhibition there done in collaboration with rising contemporary label Each x Other. The show runs until July 12.

Montgomery, known for his “post-situationist” works incorporating poetic slogans, was the inspiration behind the French brand, whose name comes from one of his works.

“I like it; I get free clothes,” Montgomery said about the collaboration, before adding more seriously: “At the beginning of my work I was hijacking billboards and putting poems on them. Putting poems on clothes for me is not really any different.”

Indeed, as well as dominating Colette’s gallery space, Montgomery’s works were also visible all over the store, from its window to behind the cash registers on clothing from Each x Other’s pre-fall collection.

“We use the clothes as a canvas, and it shows,” explained Each x Other designer Ilan Delouis, who cofounded the brand two-and-a-half years ago with artistic director Jenny Mannerheim. “It’s a message about community and sharing, the meeting of art and fashion.”

The brand plans to open a concept store, gallery and performance space in Paris before year-end and will also host an exhibition at Barneys New York in September, Delouis said.

Bubbly French actress and former television presenter Aude Pépin, who is writing her own movie, confessed that despite moving in fashion circles (her boyfriend works for workwear maker Carhartt, and she recently modeled for the Surface to Air lookbook) she didn’t really gel with the fashion set at first.

“I had a bit of a cliché in mind ­— I found them difficult,” said Pépin. “Then when I started working in television and cinema, I realized how nice they really are.”