The actors talked weather and movies. 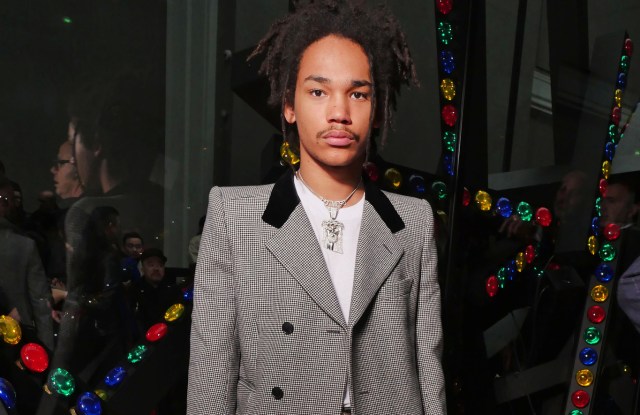 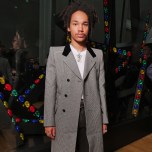 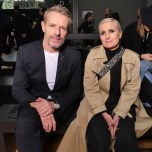 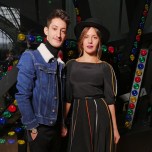 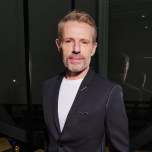 Clearly not feeling the chill, Hadid sported a black suit and black bra, accessorized with a choker and sneakers.

“The rain, it’s bad, makes me sad,” drawled Future, taking in the show set, with rows of aquariums filled with smoke and lights. French actor Pierre Niney shrugged it off, saying he was used to bad weather having grown up in Paris.

“My fiancé [Natasha Andrews] is from Australia so I think we’ll have to go to catch some rays soon, as she’s pretty depressed,” said the actor who chatted about the experience of working with Charlotte Gainsbourg on his latest film, “Promise at Dawn.”

“She has so much charisma, but at the same time, she has this shyness on set. She’s so humble and focused on the work, she’s an actress I have always dreamed of working with,” said the actor adding that his next project, a film directed by Frédéric Tellier, will be less uplifting. “I play a young guy who gets badly burned in a fire and has to rebuild his life. It’s about the will to live, basically,” Niney said.

Hartnett, who’s in town for the promotion of his film “Oh Lucy!” is also about to start work on an equally intense movie: Anthony Jerjen’s “Inherit the Viper,” about the opioid epidemic in Appalachia.

While Pattinson had to be led out of the room at one point to get some air from the flashbulbs, Hartnett stayed cucumber cool. “I’ve been involved with fashion brands since I started making films, they kind of go hand-in-hand, so I’ve known people in the fashion industry for 20 years,” he said, confessing his own sense of style tends to be quite basic. “I have kind of a uniform for myself, it’s not as fashionable as this. You know, jeans, shirt, sweater and a nice jacket,” he shrugged.

A pink-haired Noomi Rapace, whose cheery new films include ““Stockholm,” about Stockholm syndrome,” couldn’t contain her enthusiasm, meanwhile, saying after the show: “It was almost like night butterflies. It felt a bit dangerous, there was something vampirish about it, I loved all the cuts. Sort of like a “Matrix” butterfly thing and mix of streetwear,” she said. “I thought it was awesome.”