Kate and Laura Mulleavy, who are busy working on a new collection and a follow-up to their film debut, collaborated with artist and friend Mari Eastman.

It was an Eighties-themed night seemingly off the set of “Stranger Things” inside Milk Studios on Thursday in Los Angeles, where Rodarte designers Kate and Laura Mulleavy showcased a limited-edition capsule collection.

“We wanted something that spoke to nostalgia a little bit, but also felt of-the-moment,” shared Laura of the event, a collaboration with IMG’s Made and Mastercard.

Neon lights filled the room, which featured a see-now-buy-now Fred Segal Sunset pop-up in the style of a romanticized teenage bedroom. The line of T-shirts, selling for $150 each, and sweatshirts for $280 — with “Radarte” written across the front — is a collaboration with artist Mari Eastman and sold exclusively at the retail store starting today until Aug. 14.

“Made approached us and said that they were going to do a series of projects where they want you to unite with an artist,” said Laura prior to the presentation, which had models strutting around a makeshift roller-skating rink. “We immediately thought, ‘Oh, this is an amazing opportunity to work with an artist that we admire,’ and we’ve known Mari for years. She’s an amazing painter and professor. Everything was very organic, and it was just a step-by-step process of doing something that was heartfelt and fun and celebratory of her work…and wearing a T-shirt with an animal on it.”

Images of cats, a signature symbol for the artist, are prominent throughout the pieces.

“Strangely enough, we immediately said we want to use one of Mari’s cats,” continued Laura. “We wanted to do a cat shirt. I don’t know where that came from. It was just in our heads. But I think probably because we remember that about her work, and it stuck in our heads.”

Amid old-school arcades, guests — Rachel Bilson, Skai Jackson, Abigail Cowen and “Euphoria” stars Hunter Schafer and Barbie Ferreira, who showed up with Rowan Blanchard and shied away from cameras and press — enjoyed a mini carnival with cotton candy, popcorn and corn dogs. Following the fashion presentation, there was a roller-skating show, and both were unapologetic odes to the Eighties with women donning items from the capsule paired with disco leggings and HotPants. 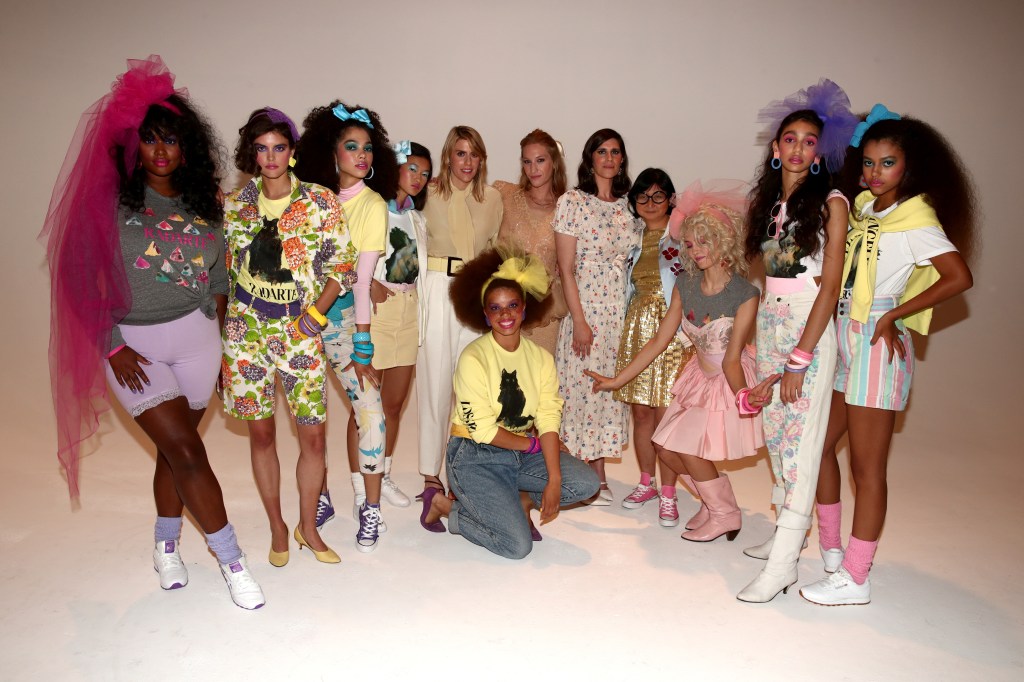 “Who doesn’t love the Eighties?” said Nikki Reed. “And also, the message behind what’s going on. I just think it’s a really cool intersection between art and fashion and technology.”

That technology is the use of blockchain, provided by Mastercard and available for each item of the capsule. By taking a photograph of a QR code on a hang tag, shoppers receive “visibility into a product’s journey and access to important information, like where it’s from, how it was produced, whether it’s authenticated or not,” shared Sherri Haymond, executive vice president of digital partnerships at Mastercard.

“These technologies are enhancing the experience in the store,” shared Fred Segal’s president, John Frierson. “This is one of a few that we’ve done with Mastercard demonstrating a technology.…This is bigger, because Made is producing it, so I think they wanted to make a bigger statement.”

With sustainability in mind, conscious consumers increasingly expect transparency, and as a result, more companies are using the technology as a selling point. The issue was a topic of conversation among guests.

“A lot of things that are sustainable, for people, it came with the misconception that it was less-than,” shared Reed, who founded BaYou With Love, a line of jewelry made from gold taken from motherboards of recycled technology. The actress partnered with Dell when she launched the company.

“We were using all of the gold from the motherboard of their computers,” continued the actress. “My goal is to show customers that you don’t have to compromise on luxury to feel like you’re a part of something that’s friendly for the planet.”

The evening concluded with a performance by Susanna Hoffs of the Bangles, who sang 1986 crowd favorites “Walk Like an Egyptian” and “Manic Monday,” followed by a dance party with the L.A.-based designer sisters letting loose behind the DJ booth, as the music blared a variety of hits, from The Cure to Dolly Parton.

Looking ahead, Laura shared that the brand was busy working on a new collection. Rodarte is noticeably missing from the spring New York Fashion Week schedule. “It’s beautiful,” she said, keeping mum about the details.

They’re also putting together the follow-up to their 2017 film debut, which starred muse Kirsten Dunst, “Woodshock.”

“We’re working on a new movie, yes,” said Laura. “It’s not at any stage to talk about what it is yet, but we are planning that, and we’re excited for it.”