L.A. Protests Cause Rodeo Drive, Luxury Retail to Shut Down

Fearful of riots and looting, many stores are preemptively closing just days after beginning to reopen in LA.

As thousands of demonstrators protesting the killing of George Floyd by a Minnesota police officer moved westward in Los Angeles, luxury retail started to board up in fear of riots and looting.

The entirety of famed luxury shopping strip Rodeo Drive was blocked to traffic by early afternoon on Saturday, as protestors were still miles to the east. The Beverly Center, a mall in West Hollywood that houses a number of luxury brands, also decided to close entirely on Saturday, a representative confirmed. The center had just reopened on Friday, after L.A. officials suddenly announced earlier in the week that in-store shopping could resume after months of being prohibited due to the coronavirus pandemic. 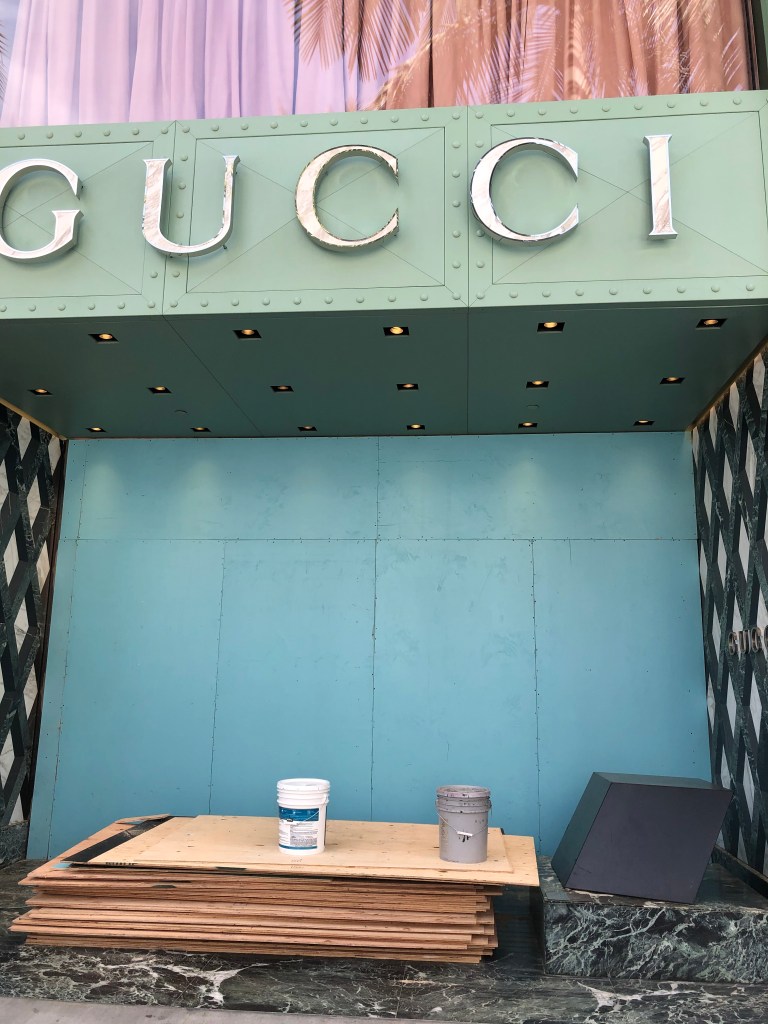 Gucci’s just reopened store on Rodeo Drive was quickly boarded up on Saturday in fear of protests.  Kali Hays/WWD

On Rodeo, the likes of Gucci, Prada, Dior, Rolex, and Louis Vuitton were being hurriedly boarded up by workmen as of midday on Saturday. A number of the stores had slowly started to reopen since Wednesday, allowing shoppers inside and refreshing merchandise displays. On Saturday, the same stores were again locked and emptied of all merchandise as police stood at traffic barricades.

In Beverly Hills and the Downtown area of L.A., an 8 p.m. curfew was mandated by late afternoon. West Hollywood is expected to do the same, although the neighborhood has not made it official. A curfew of the same hour enacted the previous night in Minneapolis, where George Floyd was killed and protesting began early this week, did not curtail protestors in that city. 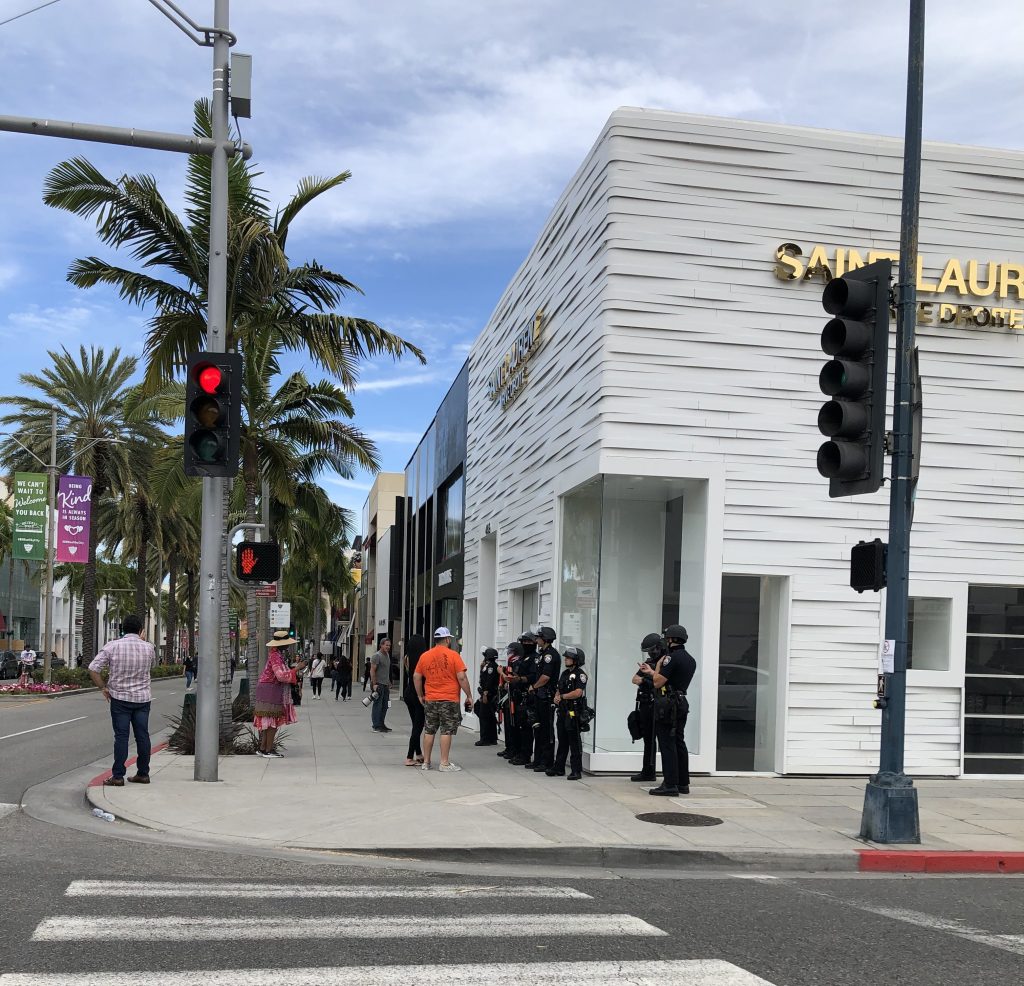 Just before 4 p.m., police in riot gear had started to gather on Rodeo Drive in L.A.

A policewoman on duty confirmed the police presence in Beverly Hills and the actions of the retailers on Rodeo were due to the protests in the area and the rioting Downtown the night before. On Friday night, a second night of protests in L.A. had turned to looting of some local jewelry stores.

As the protestors moved apace from further inside L.A., mainly near the Grove shopping center (which was planning to reopen on Monday for the first time since the pandemic) Beverly Hills police could be seen activating drones headed in the direction of the oncoming crowd. As the thousands of protestors began to stream onto Elm St. in Beverly hills, still heading west, they chanted “No justice, no peace,” “Black lives matter” and “Prosecute killer cops” as onlookers cheered, filmed with their phones and honked their car horns in support. There were two police helicopters overhead, but no police interaction could be seen on the ground as the large group walked, blocking traffic for a time.

In other regions of the country, days of protests over Floyd’s death (one of several recently publicized deaths and racist encounters experienced by Black men and women) erupted by Wednesday night into looting and vandalism in some areas.

While most of the affected businesses have been smaller, independent operations, Target has closed dozens of stores in the Minneapolis region. Luxury brands like Dior and Louis Vuitton are said to have had looting at stores in Atlanta and Oregon on Thursday night, both cities where protests took place. Both brands had again closed their stores in L.A. by Saturday and declined to comment on any looting in the other areas. A spokeswoman for Vuitton did say that the brand does not have a date for reopening stores right now.

As for the Beverly Center, The Webster, which faces the street, had been boarded up Saturday afternoon. By evening there was graffiti covering the pink plywood the store had used. At the Gucci store on Rodeo, by 6 p.m. its blue plywood had been tagged with “Eat the rich” and then broken in some spots, according to local news reports. At The Grove shopping center, graffiti of “Black lives matter” was visible by evening. Rumors of vandalism in other shopping areas of L.A., like on Melrose Ave. and Robertson Blvd., started percolating by evening as well, but could not be confirmed.

A spokeswoman for the Beverly Center, a Taubman property, said there had been no damage. The decision to close the mall was actually led by the luxury tenants that decided to preemptively close their doors on Saturday due to fears of looting. Despite the Beverly Center being largely indoors, brands like Gucci, Louis Vuitton and Prada, which were open at the center on Friday and were seeing shoppers spend money, didn’t want to take a chance by remaining open. 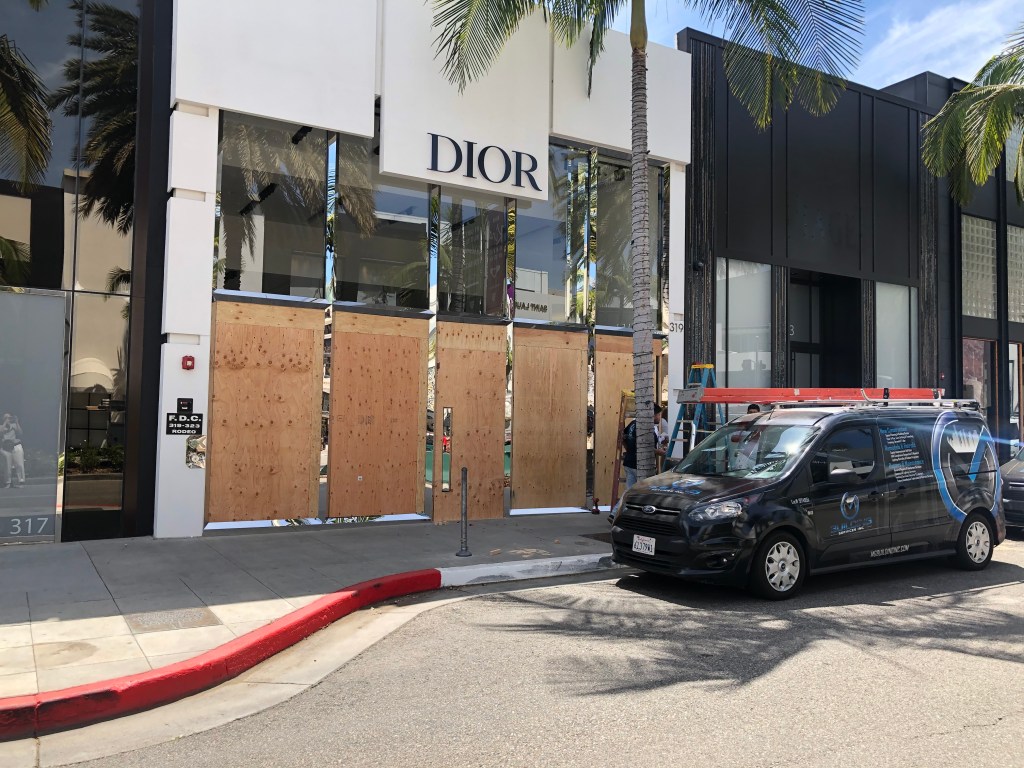 “Many tenants proactively informed us that they would not be opening today as a result of last night’s protests,” the spokeswoman said. “Out of an abundance of caution, we did not open the center today.”

The tentative plan is to reopen the center on Sunday, “barring any unforeseen circumstances.”