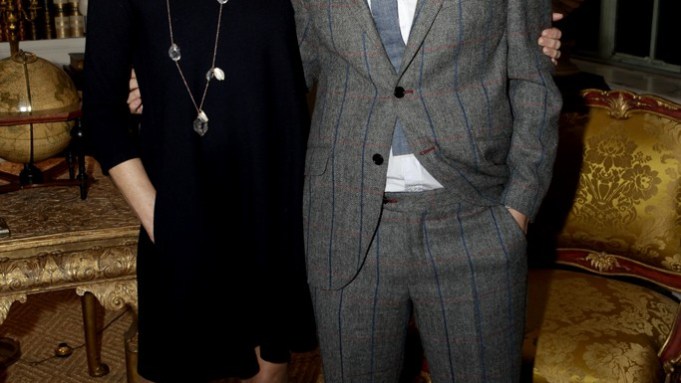 ROEHM IF YOU HAVE TO: Carolyne Roehm celebrated Nathan Turner’s new book “American Style: Classic Design and Effortless Entertaining” at her 57th Street home Monday night even though her 11th book made its debut Tuesday.

While Sarah Jessica Parker, Katie Couric, Kyle MacLachlan, Victor Garber, Robert Ruffino and other guests mingled, Roehm took a minute to talk about some of her own pursuits. Although she is the honorary chairperson and keynote speaker for this weekend’s Delaware Antiques Fair, she no longer cares to be dialed into the New York social scene as she was during the high-flying Eighties. “I’m having dinner with friends tonight. I haven’t been in Mr. Chow’s in years and I live above it,” she said.

Planning a benefit party for the volunteer fire department in Sharon, Conn., is now more her speed. (Most of her time is spent there at Weatherstone, a 1765 home that was restored after being ravaged by an electrical fire in 1999.) Roehm’s small-town gala aims to raise enough money for a new pump engine. Another neighbor is Jasper Johns, who has ratcheted up the event’s auction with a signed print of his signature flag.

Renovating the Greek Revival house in Charleston, S.C., where she plans to “warm her bones” later in life, is also on her to-do list.

While Roehm did lunch with her former boss Oscar de la Renta Sunday, she said keeping up with fashion is not a priority. “If you asked me to name the three of the hottest designers, I would have no idea,” she said. “Today the only news I have for you is that the adorable Alberto Pinto has died. I don’t even focus on fashion. It is amazing given the fact I worked in fashion for so long but it is just not part of my life.”

Dressed in a Lisa Perry dress and Maja DuBrul necklaces, Roehm, 61, said she doesn’t keep tabs on New York socialites either. “I am so out of it. I have no idea. I do know when I walk along the streets of New York, I think everyone looks horribly dressed,” she said. “When I see pictures of women in their 30s and early 40s, they look beautiful and seem to have made an effort which makes me happy. I hope they are having fun — that is all I can say.”