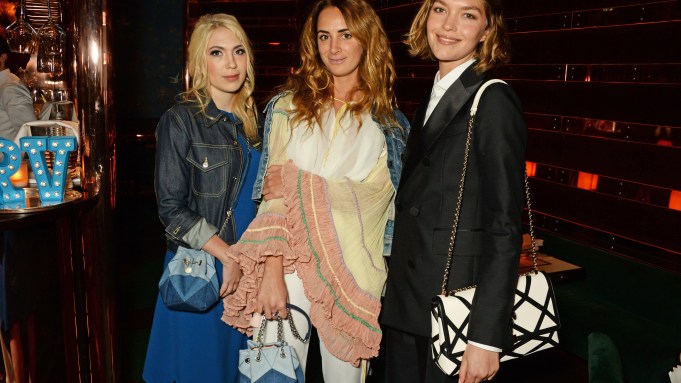 DENIM DINNER: Camille Seydoux joined Alexia Niedzielski at an intimate dinner hosted by Roger Vivier at Casa Cruz in West London on Thursday night. The brand teamed up with the celebrity stylist on a collection where she reworked accessories into a lineup of patchwork denim styles that took cues from Vivier’s 2012 Prismick line.

When the dress code called for “denim inspired,” the London crowd came through. Guests, including Quentin Jones and Jasmine Guinness, donned a range of blue-hued ensembles. Some draped dungaree jackets over shoulders while others did a double dose in denim. Relaxed fits, tapered and skinny styles were faded or frayed, in tones of deep indigos or stonewash.

Jones, who paired a vintage denim jacket and blouse over a long red Gucci skirt with floral embellishments and Roger Vivier shoes, said: “It’s about what you’ve had the longest and love the most. [That] would be my oldest pair of jeans.”

The British illustrator, model and filmmaker is working on a project with beauty brand Sisley and a short film, though she kept mum about the details.

Model Arizona Muse, a denim aficionado, noted a memorable denim item as a pair of classic Levi’s she owned when she was 10 years old. “I love denim,” she said. “Especially the crucial black jean, and I’m also loving a blue denim flare leg,” though she would end up wearing a black tux for the night.

This is the first commercial collection for Seydoux who hopes to collaborate again in the future. “I want to do many more,” she said. “I love the creative process. I have ideas all the time, I want to do so many things.”

The Prismick Denim collection is a four-piece capsule range, which includes a shoulder bag, an evening bag, platform sandals and ankle boots.

“I was very inspired by Jane Birkin,” she explained. “I have a picture of her at home, she’s wearing patchwork and she looks so effortless — both, so British and French. I was inspired by the platforms.”

Working with denim was not an issue for the stylist. “I love it because it’s classic,” she said. “It’s universally a type of fabric that you can use for accessories and clothes, and you can even wear it no matter if you’re a man or woman. It’s basic but it can also be haute couture.”

Seydoux’s fashion sense stems from familial ties: Both her sister Léa, who starred in James Bond’s “Spectre” and the “Grand Budapest Hotel,” and her mother-in-law, model Farida Khelfa, are front-row regulars. “I’m very inspired by my family,” she said. “I have one sister who is a photographer and another who is an actress. My mother used to have a shop and my mother-in-law was a muse of Alaïa and Jean Paul Gaultier. I was completely in awe. I learned so much from her. I knew who Azzedine Alaïa was when I was 8 years old.”

The stylist is about to shoot for Vanity Fair Italia — this time as a model. “When they called me I thought they were joking. They had a stylist for me. Can you imagine that?”