The limited-edition capsule called Caprices is to be sold on Theluxer.com, starting today. 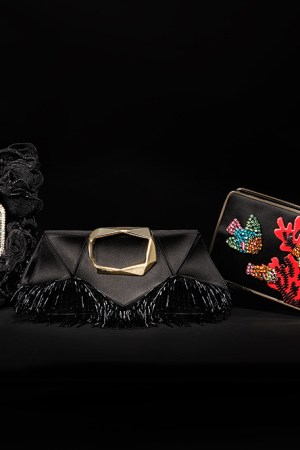 IN THE FAMILY: Roger Vivier is looking to its heritage. The Parisian shoemaker is launching a capsule collection made of selected archival pieces designed by its creative director Bruno Frisoni.

The limited-edition Caprices line includes, among others, the brand’s signature Miss Yon pumps festooned with bird feathers, the Bug evening tube clutch with its chic insect appliqués and a pair of open-toed heels sporting an artistically shaped rosebud made of raffia, which Frisoni described as “a summer hat for your feet.”

Spanning shoes, bags and jewelry, the 35-piece collection is to go on sale today on Theluxer.com, the official e-commerce partner of the Tod’s group, which comprises Tod’s, Hogan, Fay and Roger Vivier, and is owned by Diego Della Valle. Prices are available on request.

Fronting the campaign for Caprices is Julia Restoin Roitfeld, who has been photographed against a sober black background by Michael Avedon, Richard’s grandson, offsetting the collection’s eccentric character.

Restoin Roitfeld said about the brand: “It’s typically French for me because it has this right balance between being super classic and timeless with little quirky details, and I think that’s what makes it special.”