Roksanda Ilincic is marking ten years of her Roksanda label with a capsule collection of dresses that riffs on her archive designs. 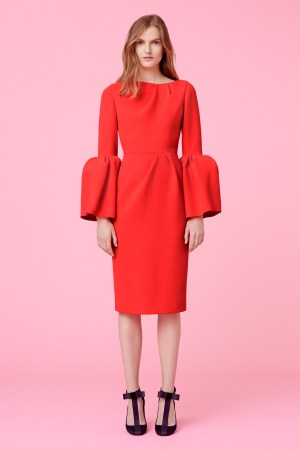 Roksanda Turns 10: Roksanda Ilincic’s Roksanda label marks its 10th anniversary this year, and the London-based designer has dipped back into her archive to celebrate the milestone.

The designer has this week launched a 10-piece capsule collection that’s inspired by Ilincic’s back catalogue of designs — which make a feature of bold colors and strong silhouettes — over the past 10 years.

The looks include the Margot dress that Ilincic first showed in spring 2012, a shift dress with tuliplike sleeves, which she’s redone in tomato red and a voluminous, tiered smock dress, which originally came in deep purple, but is now in black.

Ilincic said looking back at her archive, she believes that “as a designer you evolve and change season to season.” “Culture has changed and the economic situation has changed,” Ilincic mused, noting that all those influences impact her aesthetic.

And while Ilincic launched her line on the London Fashion Week schedule for spring 2006 with “12 occasion dresses,” the line now comprises looks that her woman can wear “seven days a week,” the designer said. Alongside ready-to-wear, the label also includes a children’s collection, Blossom, and swimwear, while looking ahead she has categories such as handbags and fine jewelry in her sights, Ilincic said.

And after the designer opened a store on London’s Mount Street in 2013, she said she’s already mulling locations in other cities, but was mum on the details.

The 10th anniversary capsule collection is being sold at the Roksanda store on Mount Street and at Harvey Nichols in London.