By Natalie Theodosi and Lorelei Marfil on November 20, 2015
View Slideshow 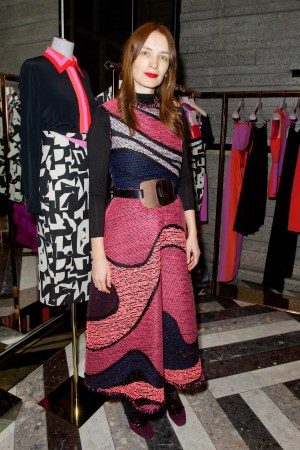 PARTY MODE: London designers hit the street — Mount Street, that is — to mark the start of the Christmas season.

Roksanda Ilincic and Nicholas Kirkwood helped Mount Street flip the switch on the holiday lights, with cocktail parties at their respective boutiques.

“It’s so nice to feel like a celebrity for the day, with everyone coming to say hello and taking pictures,” said Ilincic, who greeted her guests with Champagne and caramelized sweets.

She has a series of projects in the pipeline in the coming months, but said the launch of her jewelry collection is what she’s most eager about. “We’re bringing the launch forward, so it will be available in December. It’s amazing for us, because it’s a new category.”

For his fall 2016 collection, Lo said he’s paying homage to his native Chinese roots with a line. “It’s going to be a Chinese collection,” said the designer. “I came here 10 years ago. It should be a celebration of the high and low.”