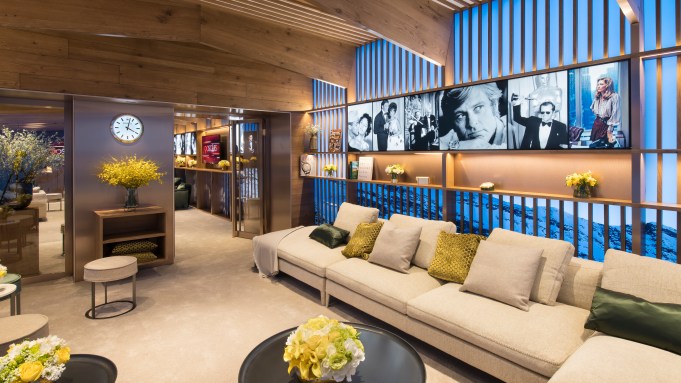 Time will be up in a more literal way at the Oscars this year. Swiss luxury watch brand Rolex has returned for the third year to design and host The Greenroom backstage at the Dolby Theater for the big night on March 4.

Each year, its in-house design team creates a new world inside the 100-square-foot space. This year, the theme is a chic Swiss Alps chalet with virtual windows looking out onto the Matterhorn.

Rolex has a long history in cinema via the appearance of its watches in countless films, and in 2017, the brand forged a partnership with the Academy of Motion Picture Arts and Sciences, both as a sponsor of the Oscars as well as founding supporter of the Academy Museum of Motion Pictures, due to open next year.

The materials used in the decor are predominantly wood, as would be expected in a mountain chalet, but presented with a contemporary and architectural approach. The space is dotted with beige and green sofas covered in velvet, as well as bronze detailing used to highlight the wooden beams. This year also includes a library of books and Rolex-related objects to recreate an intimate living room space. The library will also display photos of legendary actors wearing Rolex watches and film stills from unforgettable scenes in homage to the 90th anniversary of the Academy Awards.

A classic Rolex Oyster Perpetual Datejust 41 in the yellow Rolesor version will also be on display. Finally, during the broadcast of the Oscars, viewers will see a new Rolex film highlighting the art of storytelling on screen.

It remains to be seen whether the Oscars 2018 presenters and nominees will have calm enough nerves to take it all in, but the cozy space will be a respite from the roving cameras inside the theater, a spectacle that will be seen by over a billion people around the world. And, there will also be a bar, in case anyone needs a shot of liquid courage before taking the stage, or a celebratory toast afterward.