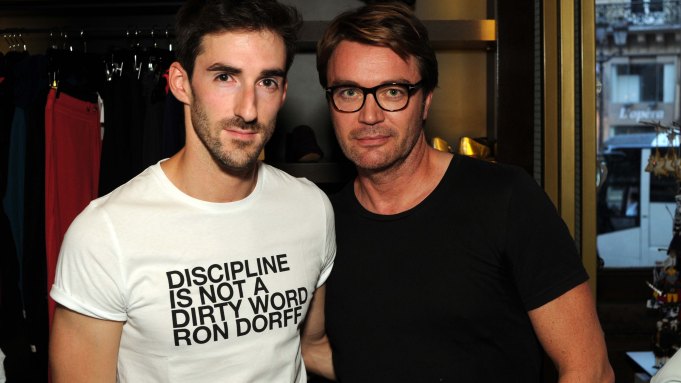 LET’S DANCE: The fashion crowd hit the bar of the Opéra Garnier on Tuesday night to fête the launch of an exclusive capsule by French-Swedish men’s wear label Ron Dorff for the site’s La Galerie boutique. Make that barre, as dancers warmed up on one stretching across the site’s lobby before performing a choreography by Carine Roitfeld’s ballet teacher, Audrey Roehrich.

“People are getting into ballet now. It used to be seen as a little old-fashioned, now it’s starting to be ‘in,’” said Vincent Chaillet, a principal dancer at the Paris Opera Ballet, clad in a sweatshirt bearing the label’s signature motto, ‘Discipline is not a dirty word.’

In a mini film made for the event, shot on a vintage Super 8 camera, Chaillet can be seen limbering up in other Ron Dorff designs in the site’s training room. The capsule includes T-shirts and sweatshirts sporting ballet expressions like pas de deux and à la barre. The corner also stocks what Ron Dorff co-founder Claus Lindorff described as basics for “before you go out and dance on stage,” like shorts and sweatpants.

Ron Dorff in January will launch a sneaker in collaboration with French footwear brand Pete Sorensen, Lindorff said, adding: “It looks like something from East Germany circa 1982 mixed with something totally modern. Very retro-weird, very communist.”

In the crowd, calligrapher-portraitist Nicolas Ouchenir revealed he’s been working on a  ballet-related project of his own — with dancer Marie-Agnès Gillot. The pair recently visited France’s biggest prison, Maison Centrale d’Arles, based in Arles in the south of France, where Ouchenir sketched portraits of prisoners. Gillot is due to return to the prison in late September to perform a choreography based on the theme of imprisonment surrounded by blowups of the portraits, Ouchenir said. The performance will then travel to Paris’s Théâtre des Champs Elysées in early October.

On a lighter note, designer Hugo Matha said he’s preparing a cabaret show for the presentation of his latest bag collection at the newly-opened Manko Cabaret on Avenue Montaigne for Sept. 29. “There’ll be acrobats and tons of extras dressed in couture, it will be a real throwback to the cabarets of yore,” said Matha who is preparing his own couture collection for next July.