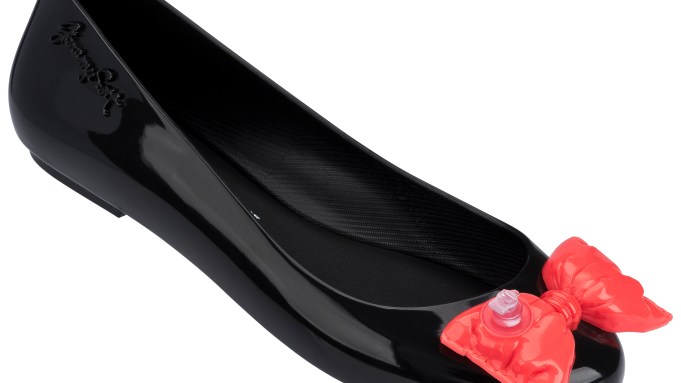 POP OF STYLE: It seems only fitting Ron Robinson nabbed the Melissa Shoes and Jeremy Scott Pop shoe collaboration line. The retailer, purveyor of all things fashion- and tech-forward, is the exclusive retailer outside of Melissa Shoes’ own stores to carry the whimsical collection of women’s and kids shoes, which launches today.

The collaboration between the two first appeared on the runway for Scott’s spring show in New York.

The only other retailer in California to have it will be the Melissa Shoes store in Torrance in addition to its stores in Miami, Las Vegas, São Paulo and Puerto Rico.

Robinson will also carry the line in his online store and will stock the collection’s ballet slippers with the heart and bow detailing as well as low-heeled boots and a peep-toe mule ranging in colors from nude and black to bubblegum pink and electric blue. The quirky offering features an inflatable nozzle detail on the shoes reminiscent of a blow-up pool toy  — hence the collection’s name.

Robinson intends to hold an event this evening at his Santa Monica store to celebrate the collection’s launch. It’s one of a steady stream of events the retailer consistently holds as part of a passion for creating experiential environments for his customers to shop in. He did it first with Fred Segal and once again for his first stand-alone store in Santa Monica. The store, already zoned for dining, is set to bring a café concept into the patio area that bridges the main part of the store with the children’s section. The concept, named Mind Body Fork, is slated for a July opening.