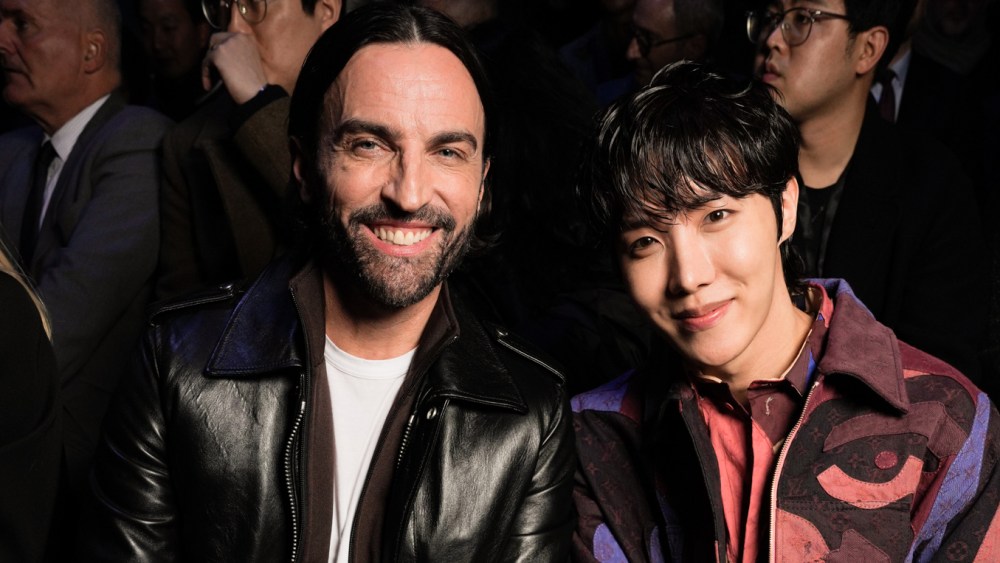 There was music and mayhem at Louis Vuitton’s Thursday afternoon show.

The approach to the rear entrance of the courtyard of the Louvre was thronged by hundreds of K-pop fans, all angling to get a glimpse of star Jung Hoseok, better known as J-Hope from BTS. They lined the street carrying signs and screaming fan chants for the superstar.

Once inside, Rosalía performed an energetic three-song set atop a parked taxi while Usher, Tyga and Got7’s Jackson Wang head-bopped along.

It was an eclectic and energetic mix for the first show from the creative collective of designer Colm Dillane, stylist Ibrahim Kamara and film director Michel Gondry.

Sitting front row around a set that was decorated as an apartment, Usher said shows like this create connections, and that he loved the idea of the brand being designed by a collective.

“All of us need to be inspired — not only to be inspired but also see this incredible collective of people from many different mediums and the intersection of artists and creatives. It’s inspiring to be able to be here and see the next vision,” for Louis Vuitton, debuting its first guest designer following the death of former artistic director Virgil Abloh in November 2021.

“Maybe it inspires something in what we do or maybe there’s collaboration that happens as a result of the conversations that happen here, maybe you’re sitting next to someone you’ve never met before and something amazing happens,” Usher said.

It was a meeting of musical minds — almost — as the self-professed BTS fan found out J-Hope was in the building. “Oh I wanna go say ‘hi,’” he said. Sitting on the other side, Jackson Wang said he wanted to go meet Usher. “He’s one of my inspirations,” he said.

Wang, member of the K-pop group Got 7 and a solo artist, was on a bit of a shopping trip ahead of planning a world tour.

“Honest answer: I’m looking for something that I want to buy right now. It’s shopping time,” he said. Wang released his latest album “Magic Man” in September, and is working on new versions of songs while gearing up to play Coachella. After the summer festival, he is planning a world tour.

“I just did two shows here and two nights in London, then I’m getting ready for an American tour then South America and probably Europe after that. The European crowds are crazy. There’s a lot of prep, but I’m excited.”

Wang good naturedly posed for selfies with fans, and posed for pics with Tyga.

Tyga made sure to be early to Louis Vuitton after yesterday’s mishap caused him to miss much of the Givenchy show.

“My driver went to the wrong location, so I walked up right when it started like just one minute late,” he said. The rapper snuck in a side door and got to see some of the show, but couldn’t take his seat.

Tyga was excited to see Rosalía perform, he said, and heard that J-Hope was in the audience but admitted he doesn’t know much about K-pop. “I mean, Louis always makes the culture. So it’s good to bring all those genres together,” he said.

Seated just a few spots down, rapper Russ has been a longtime friend of Dillane. “I used to live in his basement,” he said, noting that the KidSuper designer was always destined for success. “Honestly, I’m not surprised. His mind was always just one of the craziest, most innovative people I’ve ever met. So I’m not surprised and I’m proud of what he’s accomplished.”

Russ is putting the finishing touches on an album that has been in the works for two years. “I did some deep diving and soul searching for this — my more vulnerable, introspective side. I really went through an excavation process.”

Model Karlie Kloss is in town to attend some shows during the upcoming couture week, and decided to make a day of the Louis Vuitton afternoon show and hitting up the NBA basketball game later in the night.

“I find really interesting styles, and I love just how nuanced it is. I really like men’s fashion — maybe it’s because I’m so tall that I actually love to wear it,” she said. She had already prepped her courtside look to watch the Chicago Bulls play the Detroit Pistons. “I have a very sporty, cool Adidas outfit but I’ve got to get a hat.”

The model said she is a fan of the Memphis Grizzlies, but would lend her cheers to the Chicago Bulls in Thursday night’s game. “Gotta represent the Midwest,” she said of her birth city.