Rosie Huntington-Whiteley’s on a Roll

The model-turned-actress is putting a fashionable spin on the term “busybody.” 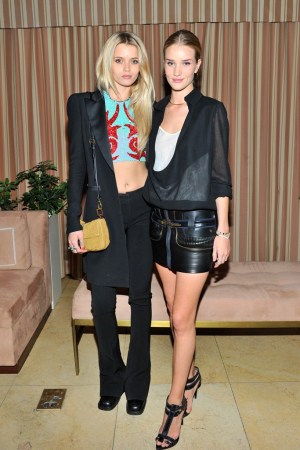 ROSIE ON A ROLL: Rosie Huntington-Whiteley is putting a fashionable spin on the term “busybody.” Hot off the Balmain and Givenchy runways at Paris Fashion Week, the model-turned-actress is readying the release in May of her second film role, in “Mad Max: Fury Road,” costarring Charlize Theron and Tom Hardy. Also keeping the blonde Brit busy this fall is work on her new lingerie line for Marks & Spencer, called Rosie for Autograph.

“I’m off to London next week because I’m doing more shoots for my line,” said Huntington-Whiteley, who also recently released her ad campaign for Moroccanoil and inked a contract with Australian beauty brand ModelCo. “I’m busy at the moment. It’s good. Life is really good.”

Huntington-Whiteley even had time to host a dinner at the Sunset Tower Hotel on Wednesday with e-commerce site Forward by Elyse Walker. Liberty Ross, Abbey Lee Kershaw and Cher Coulter were among the guests who came to celebrate designer Anthony Vaccarello, whose label retails on the site.

Raising her glass to the Italian-Belgian designer, Walker’s toast praised Vaccarello’s elevated and refined pieces. “We just can’t get enough of them,” she said. “Anthony has taken sexy to a whole new level.”