Rosie the Riveter Reborn by Cotton Incorporated, The Great

The new ads are intended to celebrate the progress of women in the workforce over the past 75 years.

Soccer star Carli Lloyd is a modern-day Rosie the Riveter.

Rosie the Riveter is making a comeback.

In celebration of National Women’s History Month, Cotton Incorporated today will unveil “Rosie Reborn,” a campaign to honor the strides women have made in the workplace over the past 75 years.

Rosie the Riveter was the star of a campaign during World War II aimed at recruiting women for the defense industry to replace men who were serving in the military. Pittsburgh artist Howard Miller created an illustration in 1942 of a woman in overalls and a bandana with her arm flexed under the words “We Can Do It!” That was followed by a similar version by Norman Rockwell that appeared on the cover of the Saturday Evening Post on May 29, 1943 that received wide distribution. As a result of the efforts, according to History.com, the female percentage of the workforce jumped from 27 percent in 1940 to nearly 37 percent in 1945. 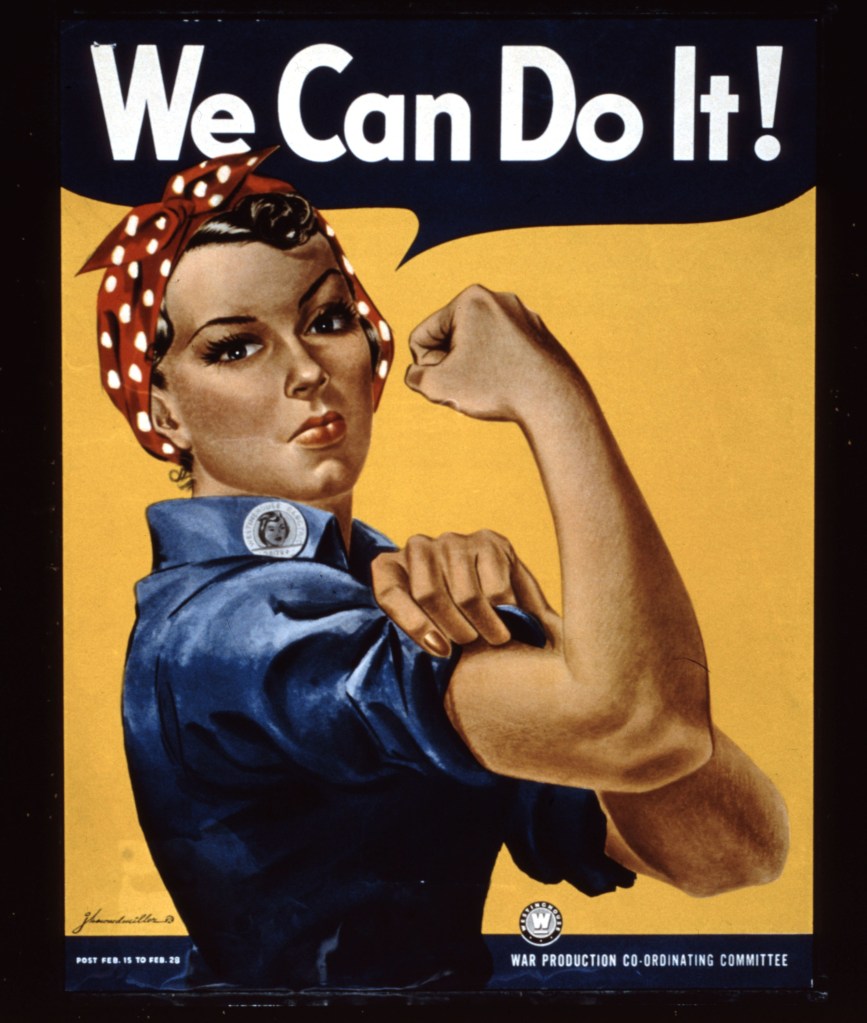 The original Rosie the Riveter.  The Art Archive/Shutterstock

“Authentic cotton denim has been a uniform of sorts throughout history: the original Rosies during World War II, the rock-‘n’-roll rebellion of the 1960s and casual Friday takeover in the Nineties,” said Kim Kitchings, senior vice president of consumer marketing at Cotton Incorporated. “Denim has empowered women in the workforce for decades and with the modern interpretation of the Rosie jumpsuit, we want women to channel that fearless determination.”

Current and Elliott said they have “looked to both history and vintage as inspiration since the beginning of our journey in fashion and our designs are thoughtful reinterpretations of classic American silhouettes in soft, washable cottons. For this project, we deconstructed an original ‘Rosie’ vintage denim jumpsuit and reimagined it to reflect a Rosie of today. Each jumpsuit in the line includes denim from a vintage Rosie jumpsuit, connecting Rosies past with Rosies present, and beyond. We wanted to create a legacy with this design.”

The Rosie Reborn campaign features six women who have broken out in often male-dominated fields. In addition to the designers themselves, other women featured are professional soccer athlete and World Cup Champion Carli Lloyd; metal artist/welder Barbie the Welder; Black Girls Code founder Kimberly Bryant, and architect Julia Gamolina. The tagline of the campaign is “Cotton Makes Denim Strong. You Make It Powerful.” A film directed by Kat Keene was also created to show the process of the re-creation of the jumpsuit.

A limited number of jumpsuits will be sold at The Great’s store in Los Angeles as well as online for $350.