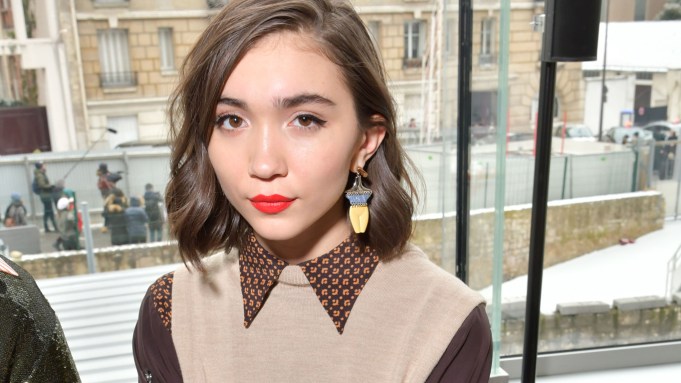 ON THE MARCH: Among the guests at the Chloé show in Paris on Thursday was Rowan Blanchard, fresh from the Los Angeles premiere of Ava DuVernay’s “A Wrinkle in Time,” in which the former Disney star appears opposite Storm Reid, Oprah Winfrey, Reese Witherspoon and Mindy Kaling.

Blanchard said the film was indicative of a sea change in the kind of projects that get greenlighted in Hollywood.

“I think that it’s a time for films to love their audiences back,” she opined. “Especially at this time, in this industry, when we’re forced to reevaluate so much, it’s really important to invest in projects that are led by women and people of color and that are representative of something more.”

The 16-year-old actress, who is a public activist in areas such as feminism, human rights and gun violence, plans to attend the March for Our Lives demonstration in Washington, D.C., to demand stricter gun laws, following the shooting at Marjory Stoneman Douglas High School in Florida that left 17 dead.

“It’s nice to finally feel respected by adults in a way, but teens have been doing the work for a long time. Teen activists led Black Lives Matter, led the DREAM Act, I think that it’s just that these kids from Stoneman Douglas are particularly privileged in a class way and in a racial way, so finally the world’s listening,” she said.

Earlier this month, Blanchard published a book, “Still Here,” which contains her own journal entries and snapshots alongside art work, poems and photographs by 20 contributors, including Gia Coppola, Rupi Kaur and Jenny Zhang.

Anna Brewster, meanwhile, has just wrapped a short film with director Hala Matar, costarring Karl Glusman, that will be released on March 5 via Semaine, an online magazine-meets-concept store. All the outfits are by Chanel.

“It’s this crazy short at the Bristol [hotel] about a director who kind of loses his mind,” said the actress, who starred in “Star Wars: The Force Awakens.”