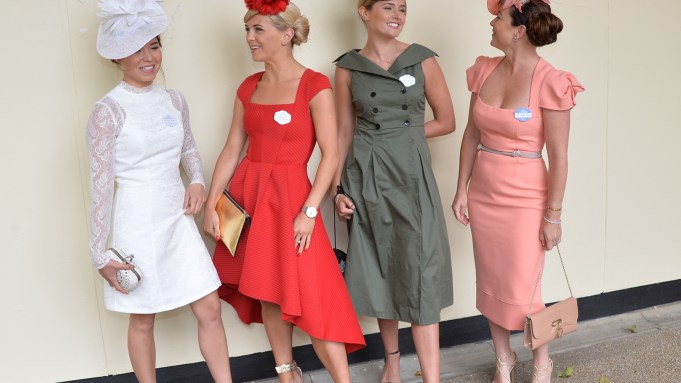 HATS OFF: Royal Ascot — which wrapped on June 24 — is one of the highlights of the British summer social season. The five-day horse racing event at the Ascot Racecourse in Berkshire saw elegant racegoers don eye–catching hats.

Well-heeled ladies took to the racing grounds dressed in bold colors and prints with looks ranging from the elegant and understated to the creative and unique. Some wore simple and ladylike dresses with waists that were nipped in, while others went wild and more whimsical to match their ostentatious headpieces.

Toppers ranged from small, feathery fascinators to oversized statement millinery. Some hats were adorned with traditional elements such as florals and feathers, while others had whimsical touches including skulls, seahorses or spaghetti.

The racing event has a strict dress code, and this year amended their sartorial rules to include jumpsuits.

Per tradition, the royal family attended the first day. The Duchess of Cambridge wore a white lace Alexander McQueen dress. She joined the Duke of Cambridge to award the King’s Stand Stakes trophy to the jockey John Velazquez and his horse Lady Aurelia at the event.

Other royals in attendance that day included Queen Elizabeth, Prince Edward, the Duke of York, Princesses Beatrice and Eugenie, and Lord and Lady Fellowes.