The Duchess of Cambridge gave New York fashion a shout out when she turned up at a state dinner wearing a floral dress by Prabal Gurung. 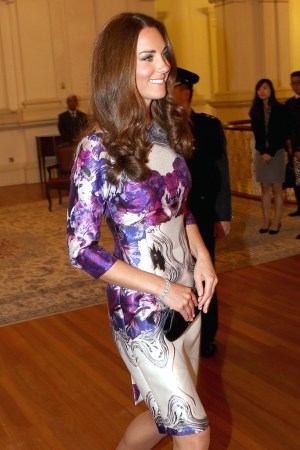 CHOOSING PRABAL: The Duke and Duchess of Cambridge may have been in Singapore on Tuesday, but Kate gave New York fashion a shout out — she turned up at a state dinner wearing a purple and white dress by Prabal Gurung, who was born in Singapore and grew up in Nepal. Earlier in the day, the duchess wore a custom-made, pale blush pink kimono-style dress by the British designer Jenny Packham, who also shows in New York. The dress featured Singapore’s national flower, the orchid. “This dress was specially designed for the trip and it was very much a collaboration,” said the designer before her show in New York today.

The duke and duchess are on a nine-day royal tour of the Far East and South Pacific that will include Malaysia, the Solomon Islands and Tuvalu.

This story first appeared in the September 12, 2012 issue of WWD. Subscribe Today.
You're missing something!
SUBSCRIBE NOW