Several versions of the Duke and Duchess of Cambridge are to go on show. 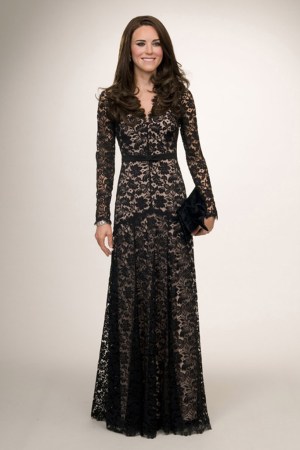 KATE AND WILLIAM ON SHOW: Madame Tussauds is unveiling a series of four wax figure versions of the Duke and Duchess of Cambridge. This morning, the museum showed off the wax version of the couple that will be displayed at its London museum. The couple is posed in a tableau of their official engagement announcement at St. James’s Palace, with Kate Middleton’s likeness wearing a replica of the blue Issa dress that she wore on the day, while Prince William wears a replica of his Gieves & Hawkes suit. Both their outfits have been re-created by the respective labels’ design teams.

Throughout the day, Madame Tussauds will go on to reveal two further versions of William and Kate, which will be displayed at its museums in New York and Amsterdam. A version to be shown at its museum in Blackpool, in the north of England, will be unveiled April 18.

This story first appeared in the April 5, 2012 issue of WWD. Subscribe Today.

The different versions mark a chance to show off some of the high-octane gowns that the duchess has worn since she’s embarked on royal engagements. The model of the duchess shown in New York will wear a replica of the Alexander McQueen lilac gown that she wore at the BAFTA Brits to Watch event in Los Angeles last summer. The version in Amsterdam will be dressed in the Temperley black lace dress that she wore to the “War Horse” premiere in London in January, while the Blackpool version will wear the embellished Jenny Packham dress that the duchess wore to the ARK charity dinner in London last year. William, meanwhile, will be dressed in the tuxedo he wore to all three events.

A spokeswoman for the museum said she expects the duchess’ “star quality” to be a major draw for visitors. “They are one of the most famous and best-loved couples in the world and Catherine has rapidly become one of the most stylish women on the international stage,” she noted.