Meghan Markle, who became Her Royal Highness the Duchess of Sussex earlier this morning, telegraphed some very powerful messages to the British public — and the world — about the sort of royal she wants to be.

Stepping out of a vintage Rolls-Royce in a minimal and an unembellished Givenchy Haute Couture dress by the British designer Clare Waight Keller, a diamond tiara on loan from Queen Elizabeth, and a veil bearing symbols of the Commonwealth, this bride was out to prove that she’s all about simplicity, heritage, respecting tradition — and serving her public.

Not for her a glittering gown with a bejeweled veil. In Waight Keller she picked a talented, low-key British designer who is all about femininity, soft edges and beautiful fabrics. It was a fitting choice: After all, Markle may have married a son and brother of future monarchs, but Harry is now sixth in line to the throne — and will likely never get near it.

The couple also married at St. George’s Chapel on the Queen’s Windsor estate — not at Westminster Abbey or St. Paul’s Cathedral in London — and invited more than 2,000 members of the public to join them for the ceremony. The wedding wasn’t a state affair, but one filled instead with family — and some famous friends — including Oprah Winfrey, Serena Williams, George and Amal Clooney, James Corden, James Blunt and Victoria and David Beckham.

A host of former classmates from Meghan’s alma mater Northwestern University were there, as well as the cast from her former TV series “Suits.”

“What we can read from Meghan’s ensemble is that she’s telling the world that she understands her responsibility, she understands the duty that she has to perform,” William Hansen, an etiquette coach, said in an interview following the wedding.

“It’s a more traditional dress, although it does have a very contemporary and up-to-date feel to it. There are the covered shoulders and the veil. There’s a nod to the past with Queen Mary’s diamond bandeau tiara, and a nod to the present, which is seen in her veil and in the embroidered flowers that represent the countries of the Commonwealth and Prince Harry’s role.”

Indeed, the veil spoke volumes about how Markle sees her future role and that of her husband, who has recently been named Commonwealth Youth Ambassador. The 53 Commonweath countries used to belong to the British Empire and for decades Queen Elizabeth has made a concerted effort to nurture ties with those countries, which include Australia, New Zealand, Malta, Barbados, Canada, Botswana, Gambia, Kenya and South Africa.

Waight Keller designed a veil representing the distinctive flora of each Commonwealth country, as the bride wanted to have all countries of the Commonwealth with her on her journey through the ceremony, according to Kensington Palace. 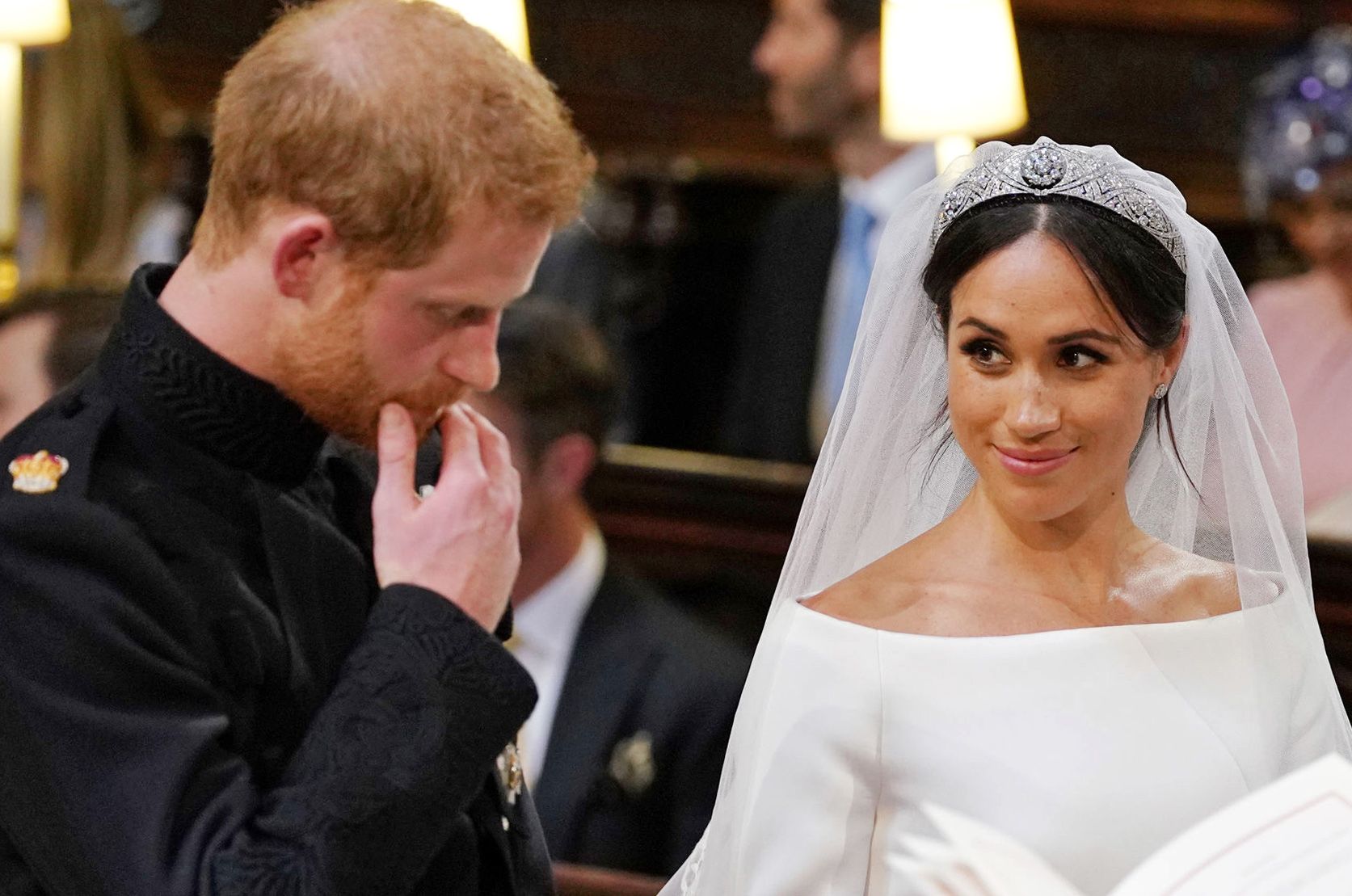 The veil is five meters long and made from silk tulle with a trim of hand-embroidered flowers in silk threads and organza. Each flower was worked flat, in three dimensions, to create a unique and delicate design. The palace said the workers spent hundreds of hours meticulously sewing and washing their hands every 30 minutes to keep the tulle and threads pristine.

In addition to the flora of the Commonwealth, Markle selected two personal favorites: Wintersweet (Chimonanthus praecox), which grows in the grounds of Kensington Palace in front of Nottingham Cottage, where the couple lives, and the California Poppy (Eschscholzia californica) the state flower from Markle’s native California.

Symmetrically placed at the very front of the veil, crops of wheat are meant to blend into the flora, to symbolize love and charity.

The dress, with its boat neck, clean lines and lack of embroidery, doesn’t scream “Look at me!” Instead, it’s quiet and demure. The palace said that after meeting Waight Keller in early 2018, Markle chose to work with the designer due to her “timeless and elegant aesthetic, impeccable tailoring,” and relaxed demeanour. 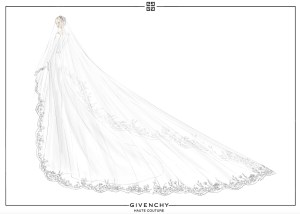 The bride had also wanted to “highlight the success of a leading British talent,” who has served as the creative head of Pringle of Scotland, Chloé, and now Givenchy, the French house’s first female designer.

The lines of the dress were achieved using six seams, and the dress extends towards the back where the train flows in soft folds cushioned by an underskirt in triple-silk organza. 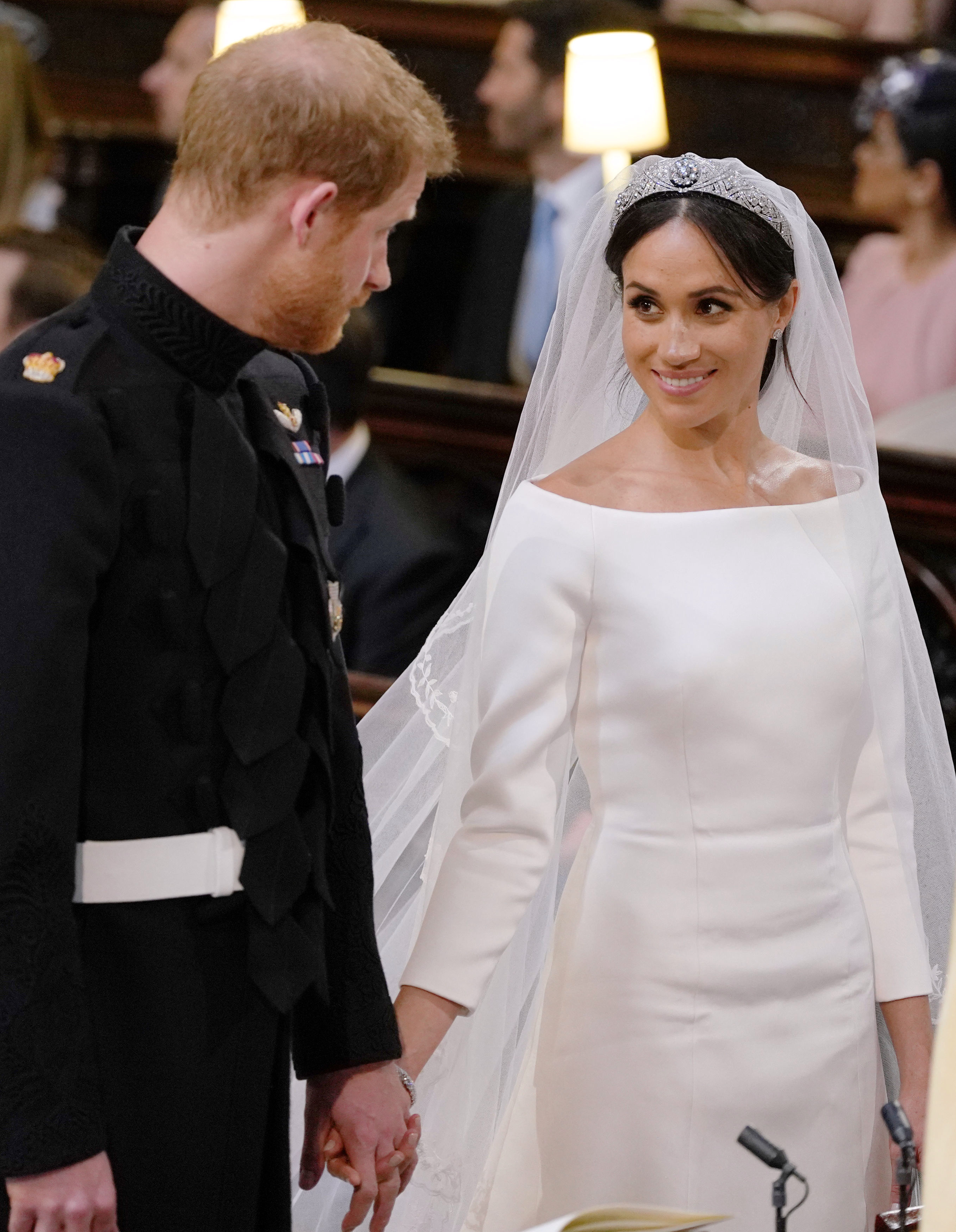 Waight Keller worked with an exclusive double bonded silk cady, which she developed. Both women wanted a “pure white” color to bring a fresh modernity to the dress, the palace said.

Waight Keller described the dress as a close collaboration between her and Markle and said the two had wanted to create a “timeless piece that would emphasize the iconic codes of Givenchy throughout its history, as well as convey modernity through sleek lines and sharp cuts.”

She called the veil “a special gesture embracing the Commonwealth flora, ascending the circumference of the silk tulle.”

Waight Keller, who joined Givenchy as artistic director last year, added that “as a British designer at a Parisian haute couture house, and on behalf of all us at Givenchy who have been able to experience such an extraordinary process of creativity, I am extremely proud of what we have accomplished and grateful to Meghan Markle, Prince Harry and Kensington Palace for allowing us to be part of this historical chapter.”

The designer has been winning positive reviews both for her ready to wear and couture collections at the French brand.

A British mother of three, Waight Keller boasts a strong background in knitwear, men’s wear and accessories — and has a reputation for cutting a killer pair of pants. Before Givenchy, she spent six years at Chloe, having joined that brand from Pringle of Scotland, and served as senior women’s designer at Gucci during the Tom Ford era. She has also worked at Ralph Lauren and Calvin Klein in New York.

A calm, soft-spoken woman with a ready smile, Waight Keller brought a sure and steady hand to Chloe, rejuvenating its rtw and accessories business and winning largely positive reviews for her feminine-yet-gamine collections.

For the wedding, Waight Keller also designed the six young bridesmaids’ dresses at the Givenchy Haute Couture atelier in Paris. Each dress has been made in ivory silk radzimir, and is high-waisted with short puff sleeves and hand finished with a double silk ribbon detail tied at the back in a bow.

Markle paired her Givenchy dress and veil with Queen Mary’s Diamond Bandeau Tiara, loaned to her by the Queen. The Diamond Bandeau is English and was made in 1932 from a brooch dating from 1893.

Markle kept the rest of her jewelry minimal, wearing only tiny earrings — and a bracelet — made by Cartier. Her shoes are based on a Givenchy pointed couture design made of a silk duchess satin, while her hair was styled by Serge Normant, with makeup by her longtime friend and makeup artist Daniel Martin.

As for the bouquet, Prince Harry handpicked several flowers Friday from the couple’s private garden at Kensington Palace to add to the bespoke bridal bouquet designed by florist Philippa Craddock.

The spring blooms include Forget-Me-Nots, which were his mother Diana, Princess of Wales’ favorite flower. The couple specifically chose them to be included in Markle’s bouquet to honor the memory of the late princess.