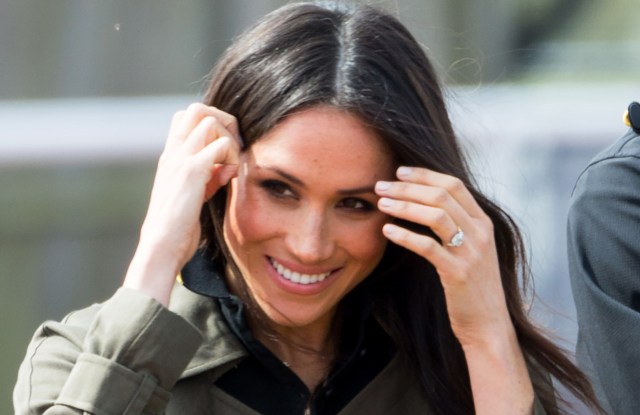 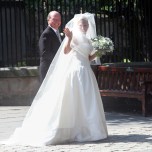 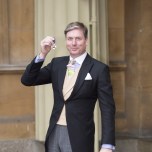 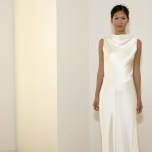 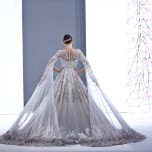 THE WHITE STUFF: With less than 24 hours to go before the big reveal, Britain’s bookmakers have now suspended betting on the big fashion question of the month: Who’s designing Meghan Markle’s wedding dress?

Although Ralph & Russo tops the lists as the odds-on favorite, other names in the running include Alexander McQueen, Erdem, Stewart Parvin, Roland Mouret and Jenny Packham. While not on the bookies’ lists, names that continue to make the rounds include Burberry — either Christopher Bailey or Riccardo Tisci — Amanda Wakeley and Emilia Wickstead.

None of the designers or brands is commenting on the speculation, and most have signed hefty non-disclosure agreements as they already dress Markle and other members of the royal family.

Ralph & Russo, the London couture label founded and run by Tamara Ralph and Michael Russo, have long been the front-runners to design the wedding gown as they created Markle’s black ruffled maxiskirt and sheer, gold-embroidered bodysuit for her official engagement photo with Prince Harry last December.

Sources have also said the dressmakers who worked with Markle on the engagement skirt and top were booked for a further three months by the bride-to-be, although they could also be making the look she plans to wear at the Saturday night reception, which will be hosted by Prince Charles.

Other candidates for that eveningwear role include Erdem Moralioglu, a friend of Markle’s and one of her favorite designers, and Mouret, another friend of the bride’s who will be attending the wedding. Earlier this week The Times of London speculated that Mouret will be her designer for the evening affair.

Parvin, who’s been designing dresses for Queen Elizabeth since 2007 and who created Zara Tindall’s wedding gown, was an early favorite, as was Packham, another unsurprising contender as she’s known for her wedding dresses and is a favorite of the Duchess of Cambridge.

Wickstead, who regularly dresses celebrities, royals and British aristos, launched a bridal line in April 2017 as part of the strategy to expand her business, while Amanda Wakeley dresses the Duchess of Cambridge and also created designs for Princess Diana.

Wakeley, who has a stand-alone bridal collection, recently dressed Markle in the white topcoat that the American wore for her first official engagement with Queen Elizabeth.

Bailey, who is officially leaving Burberry this year after nearly two decades at the company, is friends with Markle and his name has consistently surfaced. Speculation reached a fever pitch this week after Markle’s mother, Doria Ragland, was seen carrying a Burberry garment bag on her way to London for Saturday’s wedding.

While Bailey isn’t known for his bridal wear, he did design the sweeping Empire waist gown that Alannah Weston, the former creative director and now co-chairman of Selfridges, wore on her wedding day in 2007.

Rumors about Burberry could also mean that Tisci, the brand’s new chief creative officer, has won the prize. Although he won’t show his first collection until September, he famously designed Kim Kardashian’s wedding gown when he was head designer at Givenchy.

Then there are the wild cards. Although McQueen is on the bookies’ lists, it would be an unlikely choice, given the fact that Sarah Burton designed Kate Middleton’s gown. According to British press reports on Thursday, David Emanuel, one half of the creative team behind Princess Diana’s wedding dress, was spotted at Windsor on the same day of the wedding rehearsal. Emanuel designed Diana’s dress with his then-wife Elizabeth.

He now designs under the label David Emanuel Couture and works with private clients including Joan Collins, Patsy Kensit and Ivana Trump. The potential choice of an Emanuel dress would be the ultimate tribute to Prince Harry’s late mother.

The Royal Wedding Dress Code: What is a Prince to Wear?

Will Meghan Markle Wear a Tiara for Her Royal Wedding?