The Duke and Duchess of Cambridge, along with Queen Elizabeth II, all attended the service in Sandringham, Norfolk. 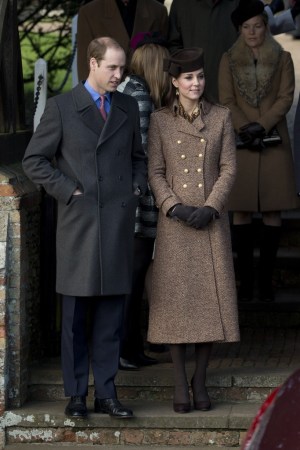 LONDON — Members of Britain’s royal family — including Queen Elizabeth II and the Duke and Duchess of Cambridge — turned out to the St. Mary Magdalene Church in Sandringham, Norfolk for a Christmas Day service Thursday morning. The duke and duchess arrived without their one-year-old son Prince George, but were joined by the duchess’ mother and father, Michael and Carole Middleton and her sister Pippa and brother James. Kate wore a long, brown tweed coat and a pillbox-style brown hat, while the Queen donned a deep fuchsia coat and a brimmed hat in the same shade. Other royals in attendance included Princesses Beatrice and Eugenie, Prince Harry, Prince Charles and Prince Philip. After the service, Kate and Harry chatted to the crowds who had been gathering outside the church since the early morning to see the family arrive.

Later that day, the Queen’s annual televised Christmas message aired in the U.K., which took the theme of reconciliation. During the speech, the royal touched on issues such as those fighting the Ebola virus in Africa, the resolution of the troubles in Northern Ireland, this year’s referendum on Scotland’s independence and the ceramic poppy tribute to World War One victims at the Tower of London, which ran from August to November to mark one hundred years since the beginning of the war.