The designer presented a selection of fall ready-to-wear runway looks during a lunch with Saks president Ron Frasch and Los Angeles fans. 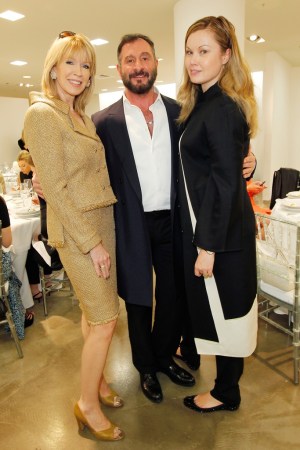 RUCCI REVS UP: Ralph Rucci was the guest of honor Friday at Saks Fifth Avenue Beverly Hills, where the designer presented a selection of fall ready-to-wear runway looks during a lunch with Saks president Ron Frasch and fans including Tatiana Sorokko, Susan Casden, Liz Goldwyn, Sally Perrin, Rochelle Gores Fredston and Angelique Soave. “It’s been my mission to keep the DNA in the collection while making it more accessible,” said the designer, who was also honored the night before by the L.A. Gay & Lesbian Center with its Visionary Award. “The American market has changed. I can’t expect young women to grasp the techniques I started with 32 years ago, and for many years I felt like I was in an ivory tower being the only American who did couture, but I’m not untouchable,” he said. “Not as many people could see or wear my clothes then, but with the advent of the Internet, there’s a whole new generation of women seeing them.”

Rucci, who will resume his couture collection in July 2014, believes the media and retailers have polarized fashion for young and old women, but his aim is to return it to a timeless and ageless state. He’s also moving in May to new headquarters on 26th Street between Sixth and Seventh Avenues in Manhattan that will be a combination atelier, showroom, office, research space and art gallery.

This story first appeared in the March 26, 2013 issue of WWD. Subscribe Today.