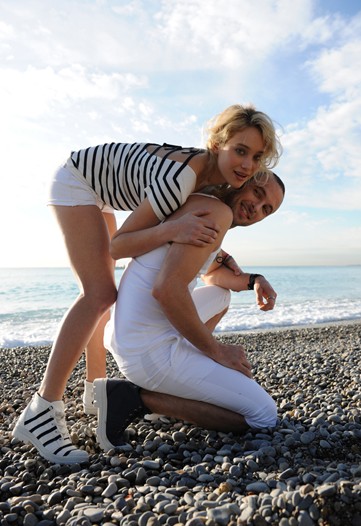 FRENCH SOLE: French shoe brand Pataugas and designer Jean Paul Gaultier are teaming up for a collaboration on three pairs of shoes for summer 2010. Gaultier has designed the capsule collection of sporty footwear for men and women based on Breton sailor and fishnet themes. Prices for the shoes, which will be sold at both Pataugas and Jean Paul Gaultier stores, will range from 139 euros to 179 euros, or $199 to $256 at current exchange. This marks the second collaboration for Pataugas, which last year tapped agnès b. for a shoe collection.

GOLD RUSH: Actor Michael Stuhlbarg didn’t expect to be nominated on Tuesday for his first Golden Globe for best actor in the musical or comedy category. In fact, he scarcely expected to be a part of the movie that got him there at all — “A Serious Man,” from Joel and Ethan Coen. “I auditioned for a very small part in the movie, for a Yiddish-speaking character. But they ended up finding fluent Yiddish speakers for those roles,” explained Stuhlbarg at a luncheon Thursday hosted in his honor by actor pals Philip Seymour Hoffman, Billy Crudup, Michael Shannon and Tim Blake Nelson at The Monkey Bar. (The celebration didn’t halt the power lunching going on all around: in the center table was Wendi Murdoch, while owner Graydon Carter sat in a corner booth).

Instead, Stuhlbarg was tapped to play protagonist Larry Gopnick.

“Just the fact that I’m here is amazing. The rest is gravy,” he said, as he greeted old friend and co-host Kristin Johnson.

“[The recognition] is well-deserved and long overdue,” attested Hoffman, who just finished directing a film, “Jack Goes Boating,” in which he also acts alongside Amy Ryan and Daphne Rubin-Vega.

Meanwhile, Stuhlbarg is hardly resting on his laurels: he’s working on Martin Scorsese’s upcoming HBO series “Boardwalk Empire,” about the rise of Atlantic City with Shannon, Steve Buscemi and Gretchen Mol, which will hit small screens in 2010.

GOING SOLO: Black Fleece will stand on its own in Milan during men’s fashion week next month. The Thom Browne-designed Brooks Brothers label will hold its first stand-alone presentation at 10 Corso Como on Jan. 19 between 2 and 5 p.m. The invitation-only event at the specialty store is designed to give the collection international exposure, a Brooks Brothers spokesman said. Black Fleece is wholesaled on a limited basis to stores including Corso Como in Milan, and Harrods will begin carrying the women’s collection next year. In the U.S., Neiman Marcus carries the shirts and ties. The Brooks Brothers collection will be shown at Pitti Uomo in Florence for the second consecutive season.

STIMULUS PACKAGE: Even the President has to impress someone with his style choices. When First Lady Michelle Obama said she is typically the one who buys the holiday gifts in the Obama household during the Oprah Winfrey interview that aired on Sunday night, she was interrupted by her husband, who pointed out he had bought her the custom-made Garavelli brooch she was wearing. Ever since, the phones at the Italian fine jewelry firm have been ringing off the hook. Sources said the President bought the gold and gemstone starburst pin for his wife for their wedding anniversary at a Chicago jewelry store, which requested anonymity.

GOOD VIBE: Even in a Tiger Woods era, some sponsorship deals still work. TYR’s logo was front and center on the trisuit that Chrissie Wellington, a triathlete from Great Britain who is sponsored by the activewear company, was wearing when she smashed the women’s course record for the Ironman World Championship in October. Her time of 8:54:02 broke a 17-year record and allowed her to capture her third consecutive title at the race in Kona, Hawaii. Craig Alexander, sponsored by Oakley and Newton Running, won the second straight year with a time of 8:20:21. NBC will show highlights of the 140.6-mile race on Saturday from 4:30 to 6 p.m., and, in addition to the professionals, the coverage will focus on several inspirational amateurs including Matt Hoover, a former winner of “The Biggest Loser”; Rudy Garcia-Tolson, a double amputee, and former running back and sportscaster Mike Adamle. “Each year we look to inspire our viewers with the raw power and competitive nature of the professional athletes along with the impressive stories of courage and determination demonstrated by all participants,” said Peter Henning, vice president of television production for Ironman.

PARLEZ VOUS: Two fashion figures have been honored as being among the highest achieving members of Britain’s French community. As part of the Français of the Year Awards, whose winners were announced Thursday night at South of France house in Mayfair, Roland Mouret was named Artist of the Year, while Geoffroy de la Bourdonnaye, chief executive officer of Liberty, was named Businessman of the Year. “I have always held France very close to my heart, despite being a U.K. resident,” said Mouret. “As everyone knows, us French are sometimes considered too proud, but winning [this award] I think makes me justifiably so.” Raymond Blanc was also named Chef of the Year, while soccer player Nicolas Anelka, who plays for London’s Chelsea team, was named Sportsman of the Year. Previous winners at the awards, which are now in their third year, include Nicole Farhi and Eva Green, who were named Entrepreneur of the Year and Artist of the Year, respectively, in 2008.