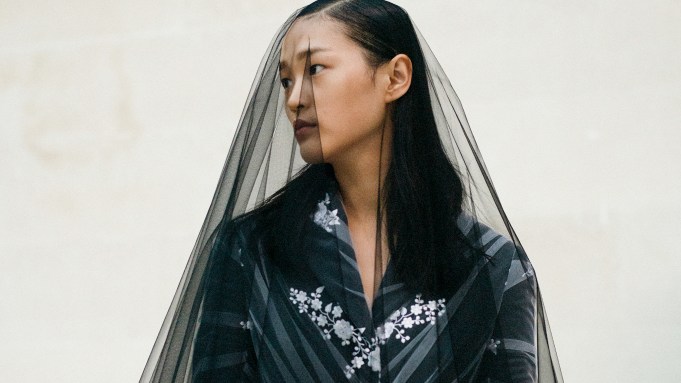 LONDON — Even before Monday’s funeral at Westminster Abbey, when London Fashion Week suspended all activity, designers were paying tribute to Queen Elizabeth II in their runway shows. They sent out special outfits, used symbolic patterns and motifs and spelled out messages on their clothing.

Wanting to acknowledge the queen’s “widespread support for creative freedom,” Michael Halpern zeroed in on a blue gown the monarch wore to attend an opera in 1957 with the then-French president. His version was a zhuzhed-up silhouette with a headscarf, topped with a billowing cape that drifted by in utter silence.

Nensi Dojaka paid tribute at the show by laying out a carpet of white hydrangeas, and asking models to carry a sprig of lily of the valley, a favorite flower of the queen’s. At his show on the eve of fashion week, Harris Reed handed one of his models a lily of the valley bouquet to wear with her short bridal dress.

At the British Museum, Erdem opened his runway spectacle with a shrouded black Bar jacket and long skirt. His collection was heavy on midcentury couture silhouettes, to which he added regal touches, like trains and shoulder drapes.

Christopher Kane opted for a floral tribute: His short cheongsam dresses were covered with bright rose or poppy prints. He noted the flowers were “symbolic of love, death, celebrations and condolences.”

Designer Jonathan Anderson took a more straightforward approach. Anderson, who staged his show at the Las Vegas arcade in Soho, sent out a model in a black T-shirt writ with the years of the queen’s long, incredible life and the words “Thank you.”

London Fashion Week resumes on Tuesday, and designers are expected to make many more tributes on the runway.