Russell Westbrook’s Honor the Gift is expanding into women’s and children’s wear with its latest collection, Free Fall, inspired by the Tuskegee Airmen.

Honor the Gift, which was created by the NBA star in 2017, launched its men’s and kids’ collection today and the women’s wear will drop on March 16.

“Having kids of my own, I wanted to dive into kids and teens as well so they have clothes that are affordable,” Westbrook said. Prices range from $45 to $56 for women’s and $28 to $90 for children.

Westbrook debuted Honor the Gift in late 2017 with a pop-up in Oklahoma City. His mission for the brand is to offer affordable fashion and communicate and connect with inner-city youth. The phrase “inner city” is one of the brand’s central motifs. 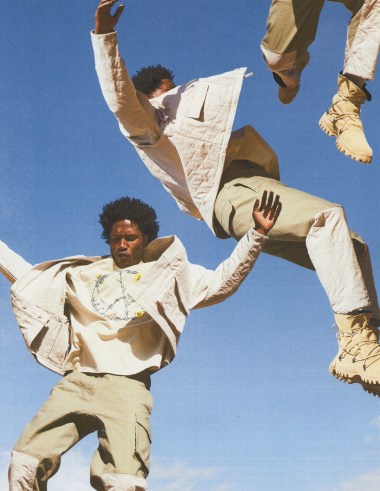 The Free Fall collection was inspired by the Tuskegee Airmen, a group of Black U.S. Air Force pilots and airmen who fought in World War II, and features pieces that reference the military, such as cargo pants and bomber jackets, as well as army green and orange color palettes.

“I’m big on African American history and I had this vision in mind for the Tuskegee Airmen,” Westbrook said. “We found ways to bring the collection together and find the true connection to the brand.”

As for how the brand is performing, he said, “It’s been great. I’ve been blessed to be able to sell out and produce more collections that people like and be able to create and design and have a real clothing line that connects to the youth and the city. I truly believe that fashion isn’t always high end. I want to make clothes that last and are very affordable, and that has always been the goal.”

Another goal of Westbrook’s was opening a school to provide education opportunities and resources for underserved youth. He, alongside his wife, Nina, and business partner, Donnell Beverly in February opened the Russell Westbrook Why Not? Academy in partnership with the L.A. Promise Fund. The South Los Angeles academy provides education for middle school and high school students in grades 6 through 12. Westbrook and Beverly also serve on the board to help oversee the school’s developments.

Asked about the process of opening a school, Westbrook said, “It takes time. I have a great team that helps me navigate and get partners and things approved in the city. My mind doesn’t stop going, but it’s an amazing process.”